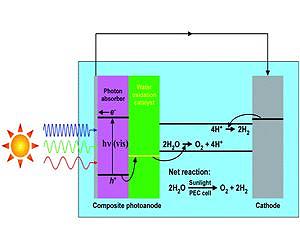 It seems that it will be possible to fabricate reliable photosynthetic material one atomic layer at a time using industrial methods.  The protocol been worked on would drive hydrogen production which is intriguing.  Such a system could well accept fairly low yields if it is sufficiently cost effective.  Imagine a siding product that produces hydrogen as a byproduct.  It does not have to be great to earn its keep.

I suspect that such an end product is still a fair ways away but it is certainly a decent objective and producing hydrogen is a viable alternative to simple electric power for the likely style of application.

A lot has been done in the past few years to produce an energy absorbing and energy converting building protocol.  It appears that we are yet a long ways away from a practical system, but the advantages are driving interest.  Thus the flow of incremental improvements such as this.


This discovery will make it possible to improve photoelectrochemical cells. In the same way that plants use photosynthesis to transform sunlight into energy, these cells use sunlight to drive chemicalreactions that ultimately produce hydrogen from water.

The process involves using a light-sensitive semi-conducting material such as cuprous oxide to provide the current needed to fuel the reaction. Although it is not expensive, the oxide is unstable if exposed to light in water. Research by Adriana Paracchino and Elijah Thimsen, published in the journal Nature Materials, demonstrates that this problem can be overcome by covering the semiconductor with a thin film of atoms using the atomic layer deposition(ALD) technique.

Under the supervision of Professor Michael Gratzel in EPFL's Laboratory of Photonics and Interfaces, the two scientists achieved this remarkable feat by combining techniques used at the industrial scale, and then applying them to the problem of producing hydrogen. With their process, cuprous oxide can be simply and effectively protected from contact with water, making it possible to use it as a semiconductor.

The advantages are numerous: cuprous oxide is abundantly available and inexpensive; the protective layer is completely impermeable, regardless of the roughness of the surface; and the process can easily be scaled up for industrial fabrication.

The research team developed the technique by "growing" layers of zinc oxide and titanium oxide, one atom-thick layer at a time, on the cuprous oxide surface. By using the ALD technique, they were able to control the thickness of the protective layer down to the precision of a single atom over the entire surface.

This level of precision guarantees the stability of the semiconductor while preserving all of its hydrogen-producing efficiency. The next step in the research will be to improve the electrical properties of the protective layer.

Using widely available materials and techniques that can be easily scaled up brings the "green" photoelectrochemical production of hydrogen closer to the industrial interest.