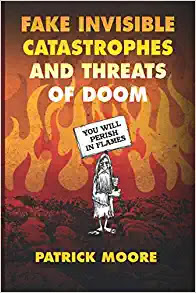 The economic rewards from faux crisis are obviously significant.  That is why they keep coming.  Today we essentially have a more and more obvious faux pandemic whose origins are deeply suspect and can be better explained as outright weaponization of the global Vaccine industry.
Read what i just said and then ask why someone paid to jamb the numbers in one direction.  A real pandemic would need bo such assistence and it would also have spread spasmotocally over several years.
Recall that the last Small pox pandemic ravished the west coast of North America in hte late nineteenth century.  Even with better knowledge itslaughtered comminities in days.  Our medical community has forgotten all this.
Greenpeace Co-Founder Dr. Patrick Moore Drops Climate & Environmental Bombshells In New Book ‘Fake Invisible Catastrophes and Threats of Doom’
By Penny Sansevieri (via email)
Author Marketing Experts, Inc.
www.amarketingexpert.com
https://www.climatedepot.com/2021/03/09/greenpeace-co-founder-dr-patrick-moore-drops-climate-environmental-bombshells-in-new-book-fake-invisible-catastrophes-and-threats-of-doom/?
CO2 is not killing the Earth, polar bear populations are growing, coral reefs are not dying, and mass extinction is a complete fantasy. Each of these arguments can be scientifically proven.
In his new book Fake Invisible Catastrophes and Threats of Doom, Dr. Patrick Moore gives us the lowdown on the current state of the planet and its people. Hang on to your hiking boots and get ready for the Truth.
Mainstream media loves an environmental catastrophe: show the public a picture of a struggling polar bear and it’ll go viral by the end of the day. Ever notice that most of today’s scare stories are based on things that are invisible, like CO2, or very remote, like polar bears and coral reefs?
The average person can’t observe or verify those phenomena from the comfort of a couch. So we take the word of activists, the media, politicians, and scientists – all of whom have huge financial and/or political interest in us swallowing what we’re fed…
We need that voice in the wilderness offering us the Truth that those in power refuse to let us see. That voice belongs to Dr. Patrick Moore. And he’s used it on a variety of platforms including Tucker Carlson Tonight, Hannity, The Ingraham Angle, Fox & Friends, Varney & Co., and Huckabee.
In his new book, Patrick Moore takes on 11 current doomsday narratives and exposes the fabrications, fake science, and downright lies propagated by mainstream media. Get ready for an eye-opening view of the world that includes close-ups on climate change, extinction, genetic modification, nuclear energy, ocean acidification, forest fires, and the Great Pacific Garbage Patch, among other topics.
Dr. Patrick Moore co-founded Greenpeace in 1971, was a director of the organization for 15 years, and led many of its campaigns, including ending nuclear weapons testing, saving the whales, and ending toxic dumping. In the mid-1980s he split with Greenpeace after he became disenchanted with his fellow Greenpeace directors for using misinformation, sensation, and fear – instead of valid science – for fundraising. An independent environmentalist and scientist, he is currently chairman of the CO2 Coalition; he lives outside of Vancouver, British Columbia.
Find out more at http://ecosense.me/
Title: Fake Invisible Catastrophes and Threats of Doom
Author: Patrick Moore
Genre: NF; Environmental Issues; Climate Change
Pages: 208
Publisher: EcoSense Environmental
Pub Date: 1/20/2021
ISBN: 979-8568595502
Available Formats: paperback, eBook
Amazon Link: http://bit.ly/AMEFakeInvisibleCatasrophesPM
#
Greenpeace Co-Founder Dr. Patrick Moore’s new book: ‘Fake Invisible Catastrophes and Threats of Doom’
Posted by arclein at 12:00 AM