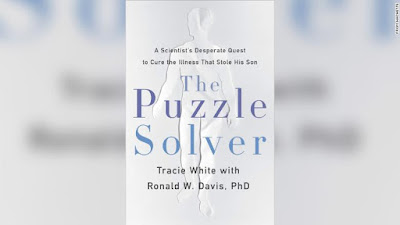 Skip COV 19.  We are talking about CFS which first got attention in association with Lyme disease or that at least when i became aware of it.  I do think that the symptons are also associated with Malaria as well and we do suspect the parasite Bameosis in COV 19 arriving on board a vaxxine dose whose counter agencies are too weak.
This then is important work.  Recall that once a patient is recovered sufficiently to exit the crisis ward they get quickly get forgotten and no doctor has a solution for CFS which tells us the patient is still in recovery.
Again what we know about Bameosis applies to all this.  It is an example of potential that we can put our finger on.  There may be dozens just like it undiscovered to date.  What has certainly failed us is the virus MEME.
A Stanford scientist's quest to cure his son could help unravel the mystery of Covid-19 long haulers
By Ryan Prior, CNN
Updated 5:59 PM ET, Fri March 12, 2021
https://www.cnn.com/2021/03/12/health/ron-davis-covid-long-hauler-scn-wellness/index.html
(CNN)At the height of a luminous career in genetics, Ron Davis, professor of biochemistry and genetics at Stanford University in California, switched to researching a disease that many of his colleagues had never heard of.
Prior to that shift seven years ago, his breakthrough work had led to dozens of patents and laid the groundwork for the Human Genome Project, revolutionizing modern biology by giving scientists a complete map of all genes in the human species.
But when his son Whitney Dafoe, then in his 20s, came down with myalgic encephalomyelitis -- better known as chronic fatigue syndrome -- he was left bedbound, unable to speak, and unable to eat solid food.
After moving in with his parents 10 years ago, Dafoe, now 37, has made little progress in getting his old life back.
Davis did what he does best -- turning to science and rallying several Nobel Prize-winning colleagues in his latest quest.
This time, he means to cure ME/CFS, which affects between 836,000 and 2.5 million Americans, according to the US Centers for Disease Control and Prevention.

The agency estimates the disease affects 17 and 24 million people worldwi
Its symptoms include brain fog, muscle pain and what's called post-exertional malaise, in which simple acts like taking a shower leave someone bedbound for days.
Davis shares his journey in his new book, "The Puzzle Solver," co-written with journalist Tracie White and released in January.
During the global pandemic, Davis' search for a cure for ME/CFS could also shed new light in understanding why some Covid-19 long haulers have stayed sick for more than a year.
This interview has been edited for length and clarity.
CNN: You had a pioneering career as a geneticist. Why did you decide that you needed to focus all of your attention on one particular disease?
Ron Davis: I had no choice. My son came down with it, and we started seeing multiple doctors. Many of them didn't know what he had, and it took several years for him to get diagnosed. Those doctors were not very optimistic about the likelihood of getting him well.
It's really hard to treat these patients, since doctors don't have any research to base anything on. Doctors really just have their own experience and trial and error trying to help them. I felt we have to understand this better. There's a lot wrong with people who have this disease.
If there were great scientists and a lot of money doing it, I probably wouldn't have changed fields. But when I looked into how much money is spent (The National Institutes of Health awarded $15 million in ME/CFS research grants in 2019), and how many researchers there are, it was appalling. There's almost no money spent on it, and very few serious researchers had worked on it.
CNN: Many people with Covid-19 develop longer-term symptoms that mirror ME/CFS, such as fatigue and brain fog. What can we learn from studying Covid long haulers alongside ME/CFS patients?
Davis: We're trying to set up to do that. It would appear that certainly some Covid long haulers do have ME/CFS. It's not a surprise. A very large number of viruses can trigger ME/CFS.
There's some evidence that the previous SARS virus could trigger ME/CFS, and also MERS could trigger it, but that's not well documented. It wouldn't at all be surprising because the symptoms look exactly like ME/CFS.
I don't know that anybody has tried to measure post-exertional malaise in Covid long haulers. To some extent, you can actually figure that out by just talking to the patients, asking them, "What happens if you overexert yourself?" The worry I have in these long haulers is that they're seeing physicians that don't know anything about ME/CFS. It's a common disease, but it's not taught in medical school in general.
CNN: What advice would you have for Covid-19 long haulers so that they can stave off longer, more harmful effects?
Davis: Know when you're at your energy envelope limit. And don't ever exceed it for any reason. Be serious about it. I see so many patients that decide, "I'm going to go do this and I know I'll crash now but pay later."
You may get right back to where you were before, but then again, you might not. Crashing may be what keeps many of the patients sick. I've talked with one patient who recovered after about five years and was trying to explore what she did to make herself recover. She said, "I just got fanatical about it and decided I must never exceed my energy envelope. After a year of never crashing, I got over it."
There's no good evidence that being physically active will help you.
CNN: How or when would you expect Covid-19 symptoms to convert into an ME/CFS case?
Davis: My guess is that it occurs during the infection.
You will try to push yourself as you'll get a little bit better from the virus, which is causing your problems. And you're hoping you'll get better, when you push yourself a little bit, but I think that just sinks you deeper and deeper into it.
It's possible that people who have Covid, if they just rest a little longer, maybe they'll get over it. But you know, if you are fatigued after a major infection like the flu or any major viral infection, my suspicions are that fatigue is ME/CFS.
I think it's a useful thing to think about because it indicates that there is a good chance you'll get over Covid-19 if you rest enough. 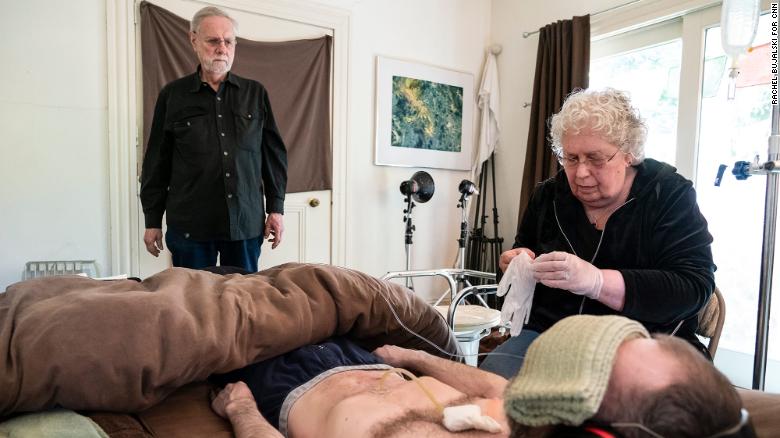 For Ron Davis and his wife, Janet Dafoe, caring for their son Whitney is a daily ritual.
CNN: The book tells the story of your son being an adventurous young man photographing wildlife in the Galapagos and studying Buddhism in the Himalayas. How is he now?
Davis: He's been bedbound for quite a few years now. He can't eat, so he's tube fed. He can't drink, so he has a port in his upper chest where we hook an IV in every day with one or 2 liters of saline. 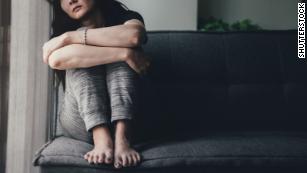 He can't talk, so it's hard to communicate with him. He's gotten a little bit better. We've been giving him Abilify (a drug that can help balance certain natural chemicals in the brain). That seems to help him.
We're guessing that it helps to elevate dopamine. There's some literature on it increasing dopamine. I'm very convinced that it helped my son.
We tried an awful lot of stuff that didn't help. He just continued to become more sensitive to stimuli.
Basically, his brain has just enough energy to keep him alive and nothing to spare.
CNN: He has a more extreme form of illness. Has studying him taught you a lot?
Davis: We did a study on severely ill patients that we're still working on, and one idea we got from the study is that severe patients are likely to have what's wrong with them be more easily detectable.
Doctors say they do their tests on some patients and there's nothing wrong with them. You just need to go to the more severe patients where you're sure to find something.
There's actually a heck of a lot wrong physically wrong with them. It's a little overwhelming. That's why it's taking so long for us to analyze all the data. About a third or so of the metabolites (small molecules in the blood involved in metabolism) are more than two standard deviations away from normal (meaning that the abnormalities are very likely due to disease rather than random chance). And the more we look, the more we find.
We just received a $1 million grant to do this and more in Covid patients as they progress through the course of their disease, some of them becoming long haulers.
CNN: Do you think it's possible that there will be a commercially available diagnostic blood test for ME/CFS in the next few years?
Davis: Yes. We have a test that's called the nanoneedle, which we've been working on. What's nice about the nanoneedle assay (this new test) is that every patient that we've had (over 50 last year) show a positive test. And we've done the equivalent number of tests on healthy controls. And they're all negative. Most diagnostic tests have some level of false positive, false negative. So far, this is at zero.
.
Now it's possible that this test just tells you that they're not healthy, but that itself would be extremely helpful. Even if it isn't specific for the disease, it might be actually quite useful because this just says something's wrong with this person, so don't give up on them. We can make it easy to do and cheap, probably within a couple of years, provided we get funding.
Posted by arclein at 12:00 AM