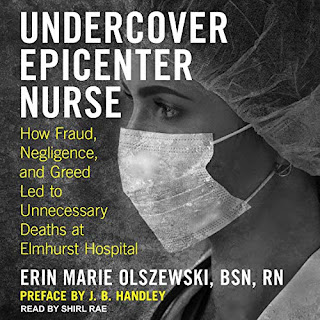 I suspected all this from the very beginning.  I am just too suspicious when it comes to human intent and motives.  I also know that folks do not cause harm unless bribed. So here we go.
This is finally the eye witness report that completely confirm it all.
Now we have the hard evidence that allows these NAZI prison guards to be arrested decades into the future for crimes against Humanity.
ERIN MARIE OLSZEWSKI – UNDERCOVER EPICENTER NURSE: HOW FRAUD, NEGLIGENCE AND GREED LED TO UNNECESSARY DEATHS AT ELMHURST HOSPITAL
https://forbiddenknowledgetv.net/erin-marie-olszewski-undercover-epicenter-nurse-how-fraud-negligence-and-greed-led-to-unnecessary-deaths-at-elmhurst-hospital/
Erin Olszewski has a background in Army Special Operations Civil Affairs, having served in many hospitals, orphanages and in schools in many countries overseas and she has been a nurse for about ten years.
When the “COVID emergency” struck, she took the opportunity to serve in the “frontlines” of the “war zone” at a New York City hospital in Elmhurst, Queens, in what was called the “epicenter of the epicenter”.
What she found was other nurses like her, getting paid $10,000 per week (with FEMA funds) to sit around and do nothing for weeks on end.
She says another thing she noticed was that New York Governor Cuomo had banned the protocol of hydroxychloroquine and zinc and that liability had been removed from the hospitals and there was financial incentive to admit patients.
She says, “$13,000 to admit a patient, $39,000 to put them on a vent [ventilator], some nursing homes and some of the hospitals; $10,000 per death.
“They banned family members, there’s no liability, so it became the perfect storm, an assembly line to a body bag.”
The reporter interjects, “That sounds like a death camp,” to which she quickly replies, “Yes.”
She also notes, “The Comfort ship was available for patients that didn’t have COVID. They bypassed it…that got bypassed and instead, they shoved every single patient into…these hospitals, because there was financial incentive to do so.
“So even if they didn’t have COVID, they were getting shoved into these hospital rooms and put on a ventilator, even though we knew they were killing 100% of the patients…
“The problem [for non-COVID patients] was the…hospital-acquired infections. So most of the time, these patients were not dying from COVID. They were dying from really, just bad nursing care. And this was when I decided that I needed to contact an attorney and tell them, ‘No one’s listening to me.’
“I tried to go up the administration, they told me to be quiet, we were all on gag orders. So I just can’t stand by and allow people to just be essentially murdered in these hospitals and nobody’s saying anything, you know, people are getting paid so much money – 10 grand a week – that’s a lot of money. It’s kind of like, why were they paying everybody so much?”
The reporter opines that Cuomo’s current #MeToo allegation crisis is really a diversion away from these much bigger problems of nursing home deaths and medical fraud.
Olszewski’s book has the facts to back up all of these statements.
Posted by arclein at 12:00 AM