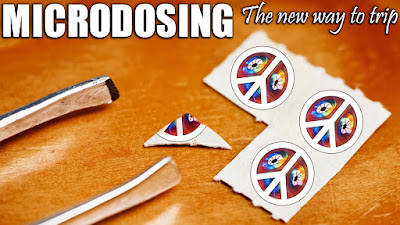 From this it appears that a micro dose could well eliminate exam fear which is highly beneficial as fear will hinder the sizing of the brain's short term processor which is no good.

It may also assist in stopping stage fright and what about shy bladder?   My point is that a micro-dose can become truly mainstream and perhaps made part of a therapeutic candy.

The missing factor with fear is that it is a mental error over riding rational thought.  Useful and necessary as a defense trigger but seriously questionable otherwise such as when you experience vertigo or freeze from heights.   We have all experience this and a candy to hand would work wonders.  Every soldier would pack them....
LSD deactivates the brain's fear center, study finds

A new study finds LSD — a Schedule I drug with "no medical value" — to be therapeutically beneficial.

11 April, 2017
https://bigthink.com/21st-century-spirituality/lsd-and-emotional-regulation
Why all drugs should be legalized
Interestingly, psychiatrist Robert Hyde decided to conduct his normal hospital rounds after ingesting the first American dose. He grew irritated, believing to have received a bunk dose. Problem is, Hyde was normally a pleasant man. He might not have achieved a schizophrenic state (his dose was rather low), but the LSD certainly had an emotional effect.

The government jumped aboard. The CIA's covert Project MKUltra was instituted in hopes of manipulating Russian spies to spill secrets. Officially sanctioned in 1953 (though trials began earlier), for two decades the US government secretly dosed a range of unsuspecting mental health patients, prostitutes, drug addicts, and prisoners in attempts of discovering LSD's abilities.
Sam Harris: Can psychedelics help you expand your mind?
Possession of LSD became illegal in 1968; the last sanctioned FDA study on its effects took place 12 years later. Being categorized as a Schedule 1 drug (no medical value), few researchers were willing to touch it. But a recent uptick in studies have found that LSD is not medically useless. It is being tested in treatment programs for alcoholics and drug abusers. Microdosing has become a certified fad. And a recent study published in Nature found LSD might help you regulate your emotions.

Twenty healthy participants with no or minimal (one time only) experience with psychedelics ingested either 100μg LSD or a placebo. They were then shown fearful or neutral faces while undergoing brain scans. Three brain regions were focused on: the amygdala, the seat of emotional processing, along with the fusiform gyrus and medial frontal gyrus, both areas that are responsive to fearful faces.

The researchers' hypothesis proved correct: LSD reduced amygdala activity. Those who took the substance were less emotionally volatile in response to fearful faces. To test against the possibility that the psychedelic effects distorted faces, researchers cite a similar response in subjects receiving 200μg LSD to fearful faces, who experienced no alteration in the recognition of neutral, happy, or angry faces.

This leads researchers to believe that LSD might help people suffering from anxiety disorder and depression. By "reducing perception of negative emotions and social cognitive deficits," LSD could soon find widespread usage in the psychiatrist's arsenal of remedies. Of course dose and mental history are important factors, but so far the results are positive.

In 1956, psychedelic advocate Aldous Huxley wrote in his essay, Heaven and Hell:

The psychopharmacist cannot add to the faculties of the brain—but he can, at best, eliminate obstructions and blockages which impede their proper use. He cannot aggrandise us—but he can, within limits, normalise us; he cannot put additional circuits into the brain, but he can, again within limits, improve the co-ordination between existing ones, attenuate conflicts, prevent the blowing of fuses, and ensure a steady power supply. That is all the help we can ask for—but if we were able to obtain it, the benefits to mankind would be incalculable.

Huxley was prescient in many ways. While Orwell's 1984 became a bestseller this year thanks to political turmoil in America, some have argued that Brave New World is a better fit of our current predicament. Though brain scanners were not available during Huxley's time he appears to have understood the nuance of LSD's effects quite well. As research shows, LSD helps us better coordinate our lives by helping us deal with our emotions in a less fearful, more thoughtful manner.
Posted by arclein at 12:00 AM