Why Does Francis Keep Kissing Hands? 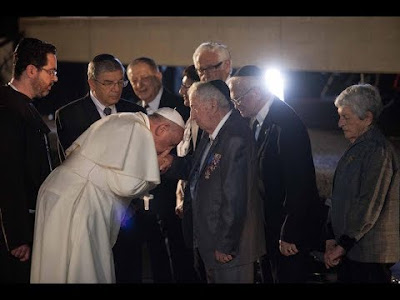 My first response, of course, was what is this?  It shows just how hardwired we are to respect authority.  It came up showing him kissing the hand of David Rockefeller which surprised me and led me to this inquiry.

Again it is in imitation of Saint Francis.

Certainly not to be construed as homage to any other but Christ..

Why Does Francis Keep Kissing Hands?
Simcha Fisher
If you do a web search for the words, "Francis kisses hands," you might find a story about Pope Francis kissing the hand of the Ecumenical Patriarch, kissing the hands of Holocaust survivors, or "raising eyebrows" when he kissed the hand of a homosexual activist priest.

Or you might find this story, somewhat less recent. The original story dates from the 13th century, and it's about a different Francis:

The saint was close to the end of his life, unable to walk and suffering from an eye disease and the stigmata. As he was brought through a region, some people from a nearby town came to ask for his help with their parish priest. They had discovered that their priest was involved in a scandalous relationship with a woman of that town. The saint was brought to the town and placed before the priest in front of everyone. They thought that the saint would upbraid the fallen priest. St. Francis instead fell to his knees, took the priest’s hands into his own stigmatized hands, kissed them and said, “All I know and all I want to know is that these hands give me Jesus.” It was said that the priest was converted.

You may wish that the Pope would do something different, besides imitating a saint. You may long to see him turn his back on the same people you turn your back on, come thundering down on the sinners you find especially revolting. But this is what he's doing instead: kissing hands. He is acknowledging that we are here to bring Christ to each other.

We hear that Pope Francis is "sending the wrong message" when he consorts with sinners like the dissenting activist priest. But it's the same message God sent to Adam when He called to him in the garden. It's the same message that Jesus was sending when He told the story of the prodigal son. When man sins, God calls him, begs him to return. The hands with the stigmata reach out for the hands that killed, that tortured, that squandered, that betrayed.

In Pope Francis' address at the Yad Vashem Holocaust Memorial on Sunday, he speaks of the sorrow and horror that God the Father feels at man's pathological betrayal, and He speaks of the Father's intense desire to bring His children back to Himself, to restore the unity between them.


A great evil has befallen us, such as never happened under the heavens (cf. Bar 2:2). Now, Lord, hear our prayer, hear our plea, save us in your mercy. Save us from this horror.

Almighty Lord, a soul in anguish cries out to you. Hear, Lord, and have mercy! We have sinned against you. You reign for ever (cf. Bar 3:1-2). Remember us in your mercy. Grant us the grace to be ashamed of what we men have done, to be ashamed of this massive idolatry, of having despised and destroyed our own flesh which you formed from the earth, to which you gave life with your own breath of life. Never again, Lord, never again!

“Adam, where are you?” Here we are, Lord, shamed by what man, created in your own image and likeness, was capable of doing.

Remember us in your mercy.

Francis is speaking, and acting, precisely like the prodigal son's father, who is God the Father. It makes no sense to welcome the young man back home, to honor him, to treat him as a son. It is offensive. It "raises eyebrows" among the older brothers who want rewards for their own good behavior more than they want the salvation of sinners.