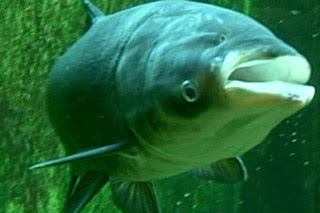 It is a pretty good bet that the carp will be in the , if not already, very soon.  My attitude is to get over it.  We eat catfish and I suspect carp is a lot better.  Besides it is a staple in .  Obviously they have been unable to fish them out either.

If anything we need to investigate what else may be added to the mix to enhance production and perhaps also give other species a chance.

The can produce thousands of tons of carp, all of which will have a ready market.

I have recently observed that the lakes of the boreal forest are also natural pens for the fresh water production of Coho.  Escapement will end up in the Arctic or the .

In time, these will be the two greatest single commercial fisheries on earth likely employing millions.

Asian carp were originally imported to the southern in the 1970s to help keep retention ponds clean at fish farms and waste water treatment plants. Heavy flooding helped them escape into the in the 1990's and they have since migrated into the and rivers. Should they make it into Lake Michigan in large numbers it would be extremely difficult to stop their spread throughout the five interconnected Great Lakes and up into the .

Huge Asian carp, which act like "aquatic vacuum cleaners" and leap into the air when spooked by motorboats, may have invaded the  Great Lakes despite a massive effort to block them, officials said Tuesday.

Researchers analyzing water samples have discovered fragments of Asian carp DNA in , although there is still no evidence that that fast-breeding fish have breached electric barriers set up along Chicago-area waterways.

"Clearly this is not good news," said Major General John Peabody, commanding general of the US Army Corps of Engineers' Great Lakes and Ohio River division.

The Corps is one of a host of state and federal agencies working to stop the spread of the voracious carp which can grow up to seven feet long (2.1 meters) and weigh 150 pounds (68 kilos).

Federal officials have warned that Asian carp - which have no natural predators - could have a "devastating effect on the ecosystem and a significant economic impact" on the seven-billion-dollar sport and commercial fishing industry.

"From what we have seen in other parts of the country, Asian carp could out-compete our native, sport and commercial fish in southern Lake Michigan," Charlie Wooley, deputy regional director of the US Fish and Wildlife Service (FWS), said in a statement.

"We call them an aquatic vacuum cleaner because they filter important food resources out of the water and turn it into carp biomass."

It's possible that the DNA discovered in two different samples could come from a decomposed carp which was carried through the electric barriers, officials said.

Or it could come from eggs that were transported on the belly of a bird. Another possibility is that flooding may have allowed the carp may to swim around the barriers.

"We have not actually seen live carp above the barrier," she told AFP. "The information we currently have does not suggest they're there in sustainable populations."

Teams will set out on boats as soon as weather allows to search the lake for signs of live carp, and the regional coordinating committee will accelerate its efforts to block their spread, she said.

Officials are considering a number of options including another mass kill through poisoning, sterilizing males to slow breeding, building new electrical barriers and researching other "biological controls."

The test results were released hours after the fight to block the carp was dealt a blow by the Supreme Court, which refused to force the closure of the shipping canal system as an emergency measure to stop the invasion.

"The motion of Michigan for preliminary injunction is denied," the Supreme Court wrote in a single line ruling.

Michigan Attorney General Mike Cox called upon President Barack Obama to use his executive powers to close the locks and said he hoped the Supreme Court would consider the issue more carefully in another pending case.

"I am extremely disappointed the Supreme Court did not push the pause button on this crisis until an effective plan is in place," Cox said in a statement.

"While the injunction would have been an extraordinary step by the court, Michigan and the other Great Lakes states are facing an extraordinary crisis that could forever alter the lakes, permanently killing thousands of jobs at a time when families can least afford it.

Asian carp were originally imported to the southern in the 1970s to help keep retention ponds clean at fish farms and waste water treatment plants.

Heavy flooding helped them escape into the in the 1990's and they have since migrated into the and rivers.

Should they make it into Lake Michigan in large numbers it would be extremely difficult to stop their spread throughout the five interconnected Great Lakes and up into the .

Remove the skin of the carp and take out all the brownish-redish-colored part of the meat, the "mud vein"; discard.

Chunk up the rest of the carp fillets. Place fillet pieces in a shallow dish. Pour the milk over them and let it stand for half an hour, turning the fillets over once during that time.  Stir the