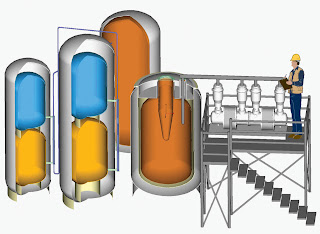 This is another incremental improvement on the business of operating thermal heat systems driven by solar sources in particular.  We have identified a superior storage medium that is well known and readily available at low cost.  All solar systems need a working fluid to grab the heat energy even it the intent is to shove it immediately into an engine.  Having a working fluid that nicely enters into a chemical reaction giving off a mobile gas avoids reaction reversal and truly stores the energy in a safe form for later convenient consumption.  It can all get cold even.

In fact it means that a solar thermal plant can be engineered to be a standby energy source that sells its energy during peak demand and will fit nicely into a photovoltaic system were no such storage may be practical.

This is a major advance for solar thermal power and likely makes the high temperature designs presently been deployed economically feasible.  It will possibly work best in the extremes of the desert plants such as the tower system built in .

It might even be possible to divert heat output at an ordinary thermal plant with this method although it is likely an expensive diversion of effort.

A cheap and effective way to store solar power is needed to increase the usability and adoption of solar power. Molten salt storage has been seen as one of the best ways to create solar power storage that is scalable to megawatt hours or more.

Calcium hydride is chosen due to its ability to be broken apart using a thermal heat source, such as the sun. Calcium hydride provides up to 0.90 kW-hr/kg of heat when it converts to calcium and hydrogen.

A central triple walled reaction chamber holds both Calcium and Calcium hydride as liquids between 1000 C and 1100 C. Heat is extracted from the reaction chamber to drive one or multiple 100 kW high temperature Dual Shell Stirling engines operating at 50% conversion efficiency.

The system uses a new low cost wire braced heliostat field with 50 square metres per panel at $100/metre squared in production. The new heliostat configuration eliminates the cosine effect, common with power tower designs, by utilising a parabolic mirror aligned with the sun throughout the day. The parabolic mirror is integrated with a quartz lens and side mirror which provides a 0.1 metre constant diameter focused light beam. The heliostat design has the added advantage of eliminating the power tower and replacing it with a small down mirror located directly above the reaction chamber.

Sunlight is focused through a quartz window, into the reaction chamber, onto an inverted molybdenum cone submerged in the liquid calcium which absorbs the solar energy. Major cost reductions occur due to the use of a down mirror system which allows the power head to be immersed within the reaction chamber inside the liquid calcium. This allows a significant increase in heat transfer capability. An insulated cover is placed between the quartz window and power head at night minimizing thermal losses.

The advantage of this system is that it is a completely reversible closed cycle. The intermittent sunlight can be chemically stored and released at a controlled rate for electric power production. The system uses materials which are low cost and provide a competitive electrical production facility for very large scale application. 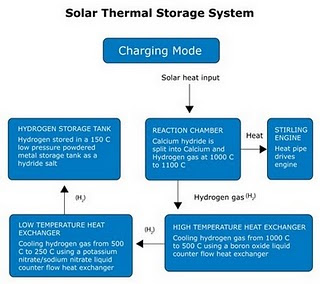 Hi Sir,
I recently came accross your blog and have been reading along. I thought I would leave my first comment. I dont know what to say except that I have enjoyed reading. Nice blog. I will keep visiting this blog very often.
Portable Garage