The Way of the Moose 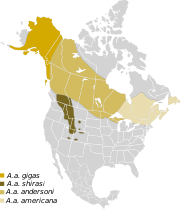 I have posted before that the boreal forest is an unexploited agricultural province that is ready for the application of human husbandry properly integrated.  The forest itself covers in excess of five million square miles mostly between and .  It is mostly all poorly drained and blanketed with wetlands and moss covered poor soils and rock.

This is a pretty unpromising story to those of us used to conventional agriculture on former temperate woodland soils and the like.  Yet it is much easier than first appearances would support.

Our anchor is the moose.  It is already incredibly successful in this particular environment, at most we want to modify their natural behavior.  Moose meat is already well understood and is presently been used extensively in and elsewhere perhaps less so.  It is well regarded and perhaps superior to beef.  The fact today is that tens of thousands of animals are taken annually with a negligible effect on their numbers.

In fact numbers are increasing because we are introducing them into likely locales. 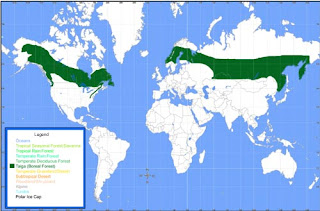 We merely need to start with been a bit cleverer about it all.  The provision of winter fodder alone will largely do the trick.  The animals will stick to a protected area that also supplies them with fodder.  This allows predators to be driven off.  Done this way, some predator populations will also decline reducing summer losses.

We have already identified cattails as a natural fodder for winter silage and as the other primary component of agriculture in the boreal forest.

Thus we develop a cycle of winter feed support and open range grazing for the remainder of the year.  The animals themselves do not require domestication in order to make this work well.-

One would also castrate the surplus males as soon as practical when they first come in with their mothers in the fall.  Their new antlers are misshaped making them immediately recognizable for later harvesting.  That would also be the obvious time to separate out mature castrated males and surplus females without calves in tow for harvesting.

Modern equipment allows us to create wet meadows able to support a crop of cattails and several harvests.  The water level can be also controlled.  We might also expect the moose to feed from these meadows and adjacent waterways during the summer.

Other crops can be folded into this regime without obvious disturbance.  Beaver is particularly suitable as again seventy percent of the carcass is usable beside the obvious furs.

I do not think that the forest vegetation will allow significant population of either beef or bison.  Yet the production of huge amounts of cattail silage may well support a cattle feeding operation also.

We can conclude that the introduction of winter fodder can concentrate the moose in an area that can be protected from wolves and cause an optimization of the herd.  Bears will still need to be actively suppressed because they fit into this cycle easily.  More importantly, what I am describing does not require any special breeding and herd development.  That can come later as the industry becomes well established.

If a square mile can produce a surplus of one mature animal every year and that animal dresses out at five hundred pounds then we have a 2.5 billion pound supply of moose meat.  Of course, we should do much better than that.  Yet these are good indicators.  A farm is likely to be a square mile.  It must support a family.  Its wetland zone must be engineered to produce thousands of tons of fodder and even rhizome starch.  Perhaps hundreds of beaver are also produced using the aspen.  Certainly it will support a lot of moose during the warm months mostly feeding from water borne vegetation in the deeper waters.

It does appear to be a viable proposition and needs presently the development of support machinery for cattail work in particular.

This is about the silliest blog entry I have ever seen in my life.

The boreal forest is not ours for the taking for a billion pounds of moose meat.

Nature evolved it to be mostly in balance, lets leave it that way.

A pleasant sentiment,but that is all it is. A square mile of the Earth's surface is essentially a close loop in its wild condition. Human intervention is called agriculture.

Some is more sustainable than others. We are still working to optimize much of what we do. Clearing a square mile of Eastern forest land by our ancestors released between fifteen to thirty tons per acre of carbon into the atmosphere. Our agriculture there today is presently dependent on large fertilizer inputs. We obviously can and need to do much better.

The Boreal forest is riddled with wetlands that are natural carbon sinks that can remain in place. Yet they can also be groomed and made over into cattail meadows producing as much fodder and starch as ten times the land as our forest soils.

Moose husbandry then integrates naturally into such a system and that works by increasing herds eliminating the winter die off as a population control method.