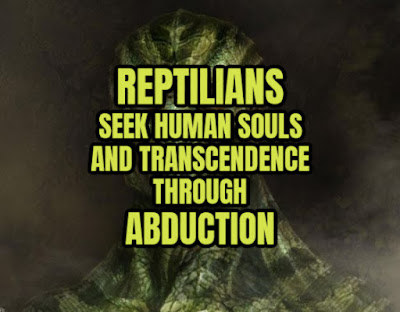 This is Lon's opinion and he has certainly reviewed far more reports than anyone.  For that reason he is a highly informed eyeball.
suddenly we address the concept of mortal soul and immortal soul.  We have already identified the GOD of the Dandelions that subsumes generations and millions of dandelions before advancing to another lifeform to do it all over again.  This is obviously absorbing millions of dandelion spirit forms to produce a stronger spirit form.
We have arrived at the same potential conclusion from another direction.  Both the Greys and Reptillians appear hierarchal conforming to inferior soul expectation.  Very interesting.
Reptilians Seek Human Souls and Transcendence Through Abduction
Wednesday, January 05, 2022
https://www.phantomsandmonsters.com/2022/01/reptilians-seek-human-souls-and.html?utm_source=feedburner&utm_medium=email
After decades of research and interviews with experiencers, it has become apparent to me that one of the reasons why people are subjected to Reptilian and alien abduction is that these entities seek to possess exclusive human traits. These desired traits seem to be centered around human life force, or what some people refer to as a soul, and its transcendence to another level after our physical body dies.
A British woman named Samantha McDonald claimed in 2014 that she had been repeatedly abducted by Reptilians since her first contact in the 1990s, but they wiped her memory every time they took her.
Samantha was invited to a British talk show named “This Morning,” where she was interviewed by Phillip Schofield and Holly Willoughby. She was asked about her contact with the extraterrestrial beings which she reportedly had been experiencing since the 1990s. She said there were two alien species, the Greys and Reptilians, who worked tandem.
While discussing her abductions, Samantha admitted that she did not remember the details of the meeting with the aliens. They had actually wiped her memories and she only remembered the feeling that she had been in some strange place. She further said that when she had woken up, there were needle marks, scratches, and bruises on her body.
“I’ve asked them what they want with me and they said they have come to take me and my family. What they were after was my energy and soul essence. I don’t know why they keep coming back to me. I think it is to do with my energies as I’m into healing and meditation.”
Samantha claimed that she is not afraid of their return. Moreover, she was convinced that after her contact with extraterrestrials, she was under surveillance on Earth, as she noticed police cars following her, and black helicopters often flew over her house.
In 2011, a study was conducted at the Research Center in Los Angeles, where 20 volunteers were recruited for studying 'out-of-body experience,' where they were instructed on how to plunge into a phase of REM sleep in order to achieve the OBE. It was reported that more than half of the participants in the experiment succeeded, and seven of them were able to communicate with aliens in this state.
As part of my research with experiencer David Eckhart and others, Reptilians and other extraterrestrials species have a belief system or religion very similar to humans. They worship a 'higher being' and express a devout faith to this supreme deity. Unlike human religion, there is no expectation of a life after death. This is the reason for their fascination with the human species on Earth. It is unclear if other human or human-like species on other planets or dimensions possess a similar life force or soul.
I discuss many exclusive alien abduction experiences, including David Eckhart's remarkable ordeal, in my book Alien Disclosure: Experiencers Expose Reality - Lon
Posted by arclein at 12:00 AM