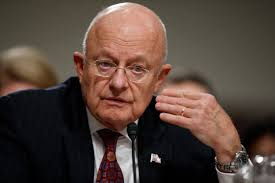 This obviously got leaked.  ouch.  It certainly explains the underlying rumble around Pence and Roberts both.  Way more important is that Clapper needed to know.  This is as close to truth as is likely possible.
These chaps had to take certain phone calls and dance.
Again high office has only been possible if you were compromised.  Not as ugly as CCP tactics but still the same drill..
BREAKING: JAMES CLAPPER INTERROGATION AUDIO…MIKE PENCE AND CHIEF JUSTICE ROBERTS ARE PEDOPHILES!
February 10, 2021 Constitutional Nobody Crime
https://ussanews.com/News1/2021/02/10/breaking-james-clapper-interrogtion-audio-mike-pence-and-chief-justice-roberts-are-pedophiles/
Written by Steve Cannon for USSA News.
So you weren’t sure if the Deep State was a real thing. Wrong.
Get ready to hear it straight from the horse’s mouth. Assuming Clapper isn’t lying to the FBI (but he’s a Democrat, so who knows?) this is the mother of all bombshells.
At about the 11:50 mark in the video, you can hear Clapper explain that Mike Pence liked young boys about half his age and that the ages got younger and younger (about 13 to 15).
Clapper follows that up by throwing Chief Justice John Roberts under the bus by explaining that both men got their fix from none other than Jeffrey Epstein…who didn’t kill himself.
Listen for yourself:
<iframe width="749" height="720" src="https://www.youtube.com/embed/KIoVOv-03DI" frameborder="0" allow="accelerometer; autoplay; clipboard-write; encrypted-media; gyroscope; picture-in-picture" allowfullscreen></iframe>
Posted by arclein at 12:00 AM

For heaven's sake, Clapper lies faster than he can breathe. He's like the headwaters of the Swamp. The right wing doesn't trust anything Clapper says on anything else, they'd be total idiots to believe him about this. I wouldn't be surprised if this old fraud personally turns out to be Q, trolling the right to keep them confused and disorganized.