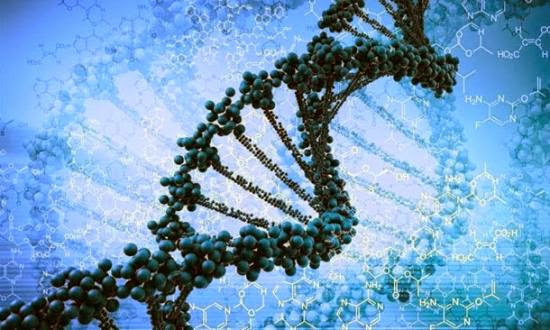 We already are pretty sure that alien meddling was instrumental in our transition to humanity a mere 200,000 years ago.  Thus the idea that earth was seeded with artificial DNA early on is not unreasdonable and surely inspires detailed mapping and comparison of our genome to that of our so called close relatives.

That the SETI test worked so well on our own DNA is a shock.  The displayed code may simply be too little too soon.   We need as much copy as possible and as much comparisons as possible.  Perhaps then a pattern will fall out.

This opens a whole are of research that works from the assumption of meaning which is hiow most science advances..

In 1960, a young astronomer by the name of Frank Drake pointed the Green Bank radio telescope at the stars Tau Ceti and Epsilon Eridani…and listened for the sounds of an alien civilization. Drake's little experiment marks the official beginning of the Search for Extraterrestrial Intelligence (SETI). Since that time, SETI has continued to scan greater parts of the sky, listening over wider and wider bands of the radio spectrum, but the silence has been deafening. While many have taken this as a likely sign that the cosmos is largely empty, it may be more likely that SETI's search has been far too restricted in its scope, relying on just one particular 20th century technology that is already fading in use. As the psychedelic philosopher Terence McKenna once dryly noted, "To search expectantly for a radio signal from an extraterrestrial source is probably as culture bound a presumption as to search the galaxy for a good Italian restaurant".

To broaden the search, other technologies of transmission have been suggested, such as lasers. But even those ideas seem limited to our cultural ideas of an 'advanced', artificial technology - but which seem likely to be considered as quaint just a century or two into our future. What if, however, aliens had already left a message for us, 'hidden in plain sight', since the dawn of history? What if we only had to look within ourselves?

A paper published last year in Icarus, the prestigious journal of planetary science, asked if it was possible that terrestrial life on Earth had been 'seeded' from beyond the Earth - and if so, does the building block of that life, DNA, contain any sort of message from our alien creators. Using mathematics, the authors of the paper - "The "Wow! signal" of the terrestrial genetic code" - looked for evidence of a statistically strong 'informational' signal in the genetic code, with surprising results:

Here we show that the terrestrial code displays a thorough precision-type orderliness matching the criteria to be considered an informational signal. Simple arrangements of the code reveal an ensemble of arithmetical and ideographical patterns of the same symbolic language. Accurate and systematic, these underlying patterns appear as a product of precision logic and nontrivial computing rather than of stochastic processes (the null hypothesis that they are due to chance coupled with presumable evolutionary pathways is rejected with P-value < 10–13).

(For counter-comments against the claims of the paper, see this Pharyngula blog post).

Interestingly, this was not the first time that Icarus had featured a paper entertaining the idea of 'biological SETI'. In 1979 the journal - under editor Carl Sagan - published a paper titled "Is bacteriophage φX174 DNA a message from an extraterrestrial intelligence?", written by Japanese biochemists Hiromitsu Yokoo and Tairo Oshima. Given how crazy the idea sounded, Sagan asked a young protégé, David Grinspoon (now a prominent astrobiologist in his own right), to check out the paper to assess whether it was legitimate. Here's how Grinspoon describes the paper in his book Lonely Planets:

A little background will help here… Prime numbers are those that cannot be made by multiplying together any other whole numbers: 1, 3, 5, 7, 11, 13 and on up, as high as you want to go. No known formula on natural process generates them. If you see primes, you know that mind is not far behind.


A widely accepted idea for interstellar message construction is to send digital pulses that repeat with a number that is the product of two primes multiplied together. This would suggest that a two-dimensional picture is being sent. For example, if you received a message that was repeating a sequence of 143 pulses, you, or your machine, would say, "Oh, 143 is 11 times 13, and these are both prime numbers. Let's make an 11-by-13 array and see if there's a picture encoded here." This technique - using primes to create easily decoded 2-D images - is a pillar of SETI theory.


Now back to the message in that virus, bacteriophage φX174. It's the first organism for which the entire genome was decoded. A remarkable feature discovered was the presence of "overlapping genes". These are sequences of nucleotides that can be read in two different frames, to encode for two completely different proteins. In other words, the DNA sequence CAATGGAACAACTCA, can be read as the three-letter "words" CAA TGG AAC AAC TCA, and this will instruct a cell to start building a protein by putting together the five amino acids specified by these triplets. However, starting at a different letter, the same sequence can also be read as ATG GAA CAA CTC, and so on, which will build a completely different protein. It is as if you could write an English sentence criticizing a bickering couple, "CAN YOU TWO NAG", that also contains a message about the ninth inning of a baseball game, "ANY OUT WON", except that to make proteins you would have to continue in this overlapping mode for hundreds of words, with both sentences making complete sense.


But wait, there's more. This organism (φX174) contained not one, but three pairs of these overlapping genes. And, if you count the number of letters in these overlapping sequences, you find that they are 121, 91, and 533. Each of these is the product of two prime numbers (11x11, 7x13, and 13x41). How weird is that? Here was the widely accepted signature of an intelligent message, turning up in the strangest of places.

Both the researchers, and Grinspoon, did what any SETI enthusiast would do: they attempted to use the prime number pairs to create two-dimensional pictures. Unfortunately, the pictures looked like random noise, and despite "trying all kinds of tricks" to decode them, no coherent message has ever been uncovered. (Below are "messages" that Grinspoon created from the DNA 'information').

Though no alien message was found, the 1979 Icarus paper seems decidedly ahead of its time from the vantage point of the year 2014. Synthetic biology is taking leaps forward: in 2010, a team led by American biologist Craig Venter synthesized a long DNA molecule containing an entire bacterium genome, and placed it within another cell. This 'synthetic organism' has watermarks written into its DNA, including the names of the 46 contributing scientists and a series of quotes from the celebrated Irish novelist James Joyce. And 'genetic artist' Joe Davis is planning to encode the whole of Wikipedia into the genome of an apple in order to echo the the forbidden fruit that grew in the Garden of Eden - a literal "tree of knowledge".

Note the amount of information that Davis is going to cram into the apple. Any alien 'message' hidden within our own DNA need not just be a short sentence; rather they could implant entire books . As science writer Dennis Overbye has commented:

The human genome...consists of some 2.9 billion of those letters — the equivalent of about 750 megabytes of data — but only about 3 percent of it goes into composing the 22,000 or so genes that make us what we are.


The remaining 97 percent, so-called junk DNA, looks like gibberish. It’s the dark matter of inner space. We don’t know what it is saying to or about us, but within that sea of megabytes there is plenty of room for the imagination to roam, for trademark labels and much more. The King James Bible, to pick one obvious example, only amounts to about five megabytes.

And the idea of biological SETI seems to make sense. Physicist George Marx wrote in support of the concept by posing a question: "How does one send a letter to a faraway planet, a letter that is light enough for easy transportation, that multiplies itself on arrival, that can correct misprints automatically, and that will be read definitely by the intelligent race of the target planet after they have reached scientific maturity?"

But is it likely that we will ever find an alien message within DNA, given the diversity of life on Earth, and the complexity of both finding and decoding such a message? Perhaps further advances in recording the genomes of various life forms, combined with advances in computer power and algorithms built to detect such patterns, will allow us to do so. As the very first SETI paper remarked, "The probability of success is difficult to estimate; but if we never search, the chance of success is zero".
Posted by arclein at 12:00 AM