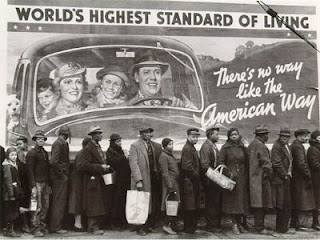 Because the economy is visibly underperforming it is natural to question just what we know or think we know.  I am seriously troubled that the work here presented has not been replicated by the thousands of economists wandering around as a matter of course.  Why do they not want to know?  This is not something that is esoteric but simple application.
Having said that, the reality of all measures used, is that their shortcomings are actually quite severe and naturally change over time.  Thus I personally, over thirty some years of following markets and trends, have generally ignored these measures and found other ways to observe what is happening.
However, before we throw them all out, it is good to see what they are saying.  This item is a timely eye opener that shows us that the effort to game the numbers has possibly now become counter productive and is misleading policy makers.
The business reality out there is that consumer demand has been sharply curtailed and is presently restrained because those same consumers must first rebuild their personal balance sheets.  This is a result of a swindle perpetrated through the whole banking system that has hugely damaged the financial system and the US dollar.  The system put in place by Reagan ran through 1998 and ’s appeal of the Glass - Stiegel Act.  It worked well enough and much better than what was in place the previous thirty years.
This is driving a slow but ongoing business contraction not unlike that of the Great Depression.  Our great good fortune happens to be that our contraction is providing room for the ongoing expansion of Southeast Asia and in general and also forcing them to invest in more internal development which was needed badly.
In time the expanded demand will reverse our contraction and clean up the mess.  Our problem is to avoid eating the seed grain.
Behind federal government's lies; real economic numbers prove US in Great Depression
by Terrence Aym
http://www.helium.com/items/1981088-real-economic-numbers-prove-us-in-great-depression
The government has been playing with the economic numbers for years and now the statistics have become nothing more than a carnival shell game.
Unfounded allegations? Read on...
John Williams* of American Business Analytics & Research LLC, has meticulously compiled the real numbers for inflation, unemployment, the money supply, and several other closely watched economic indices. The real numbers are more than just eye-opening, they are downright disastrous.

Numbers reveal an economy as bad as 1930s depression
The statistics Williams uses are based on the original formulas the government used for years before they were changed to hide the economic meltdown ’s policies were creating. Some have accused the Social Security system as being nothing more than a big Ponzi scheme. Williams' graphs prove the entire federal government has become the sanctuary of cons and criminals running a multi-trillion dollar scam on the backs of American citizens.
The sad fact is, both Republicans and Democrats have been guilty of covering up and furthering the scam while mouthing political bromides and wrapping themselves with platitudes and quotes from the Constitution.
These numbers tend to prove that neither political party is for free enterprise or the proverbial "little guy" as their policies are destroying both.
Is the real inflation rate under 10 percent?
Much of the major news media-as many Americans have finally come to realize—is in collusion with governments at the federal, state and county level. Gone are the days when journalists were true watchdogs over the public till and promoters of good government. Most news organizations have become corporate organs attached to the government at the hip, and citizens have paid a dear price for this unholy alliance.
Williams explains that the actual rate of inflation "reflects our estimate of inflation for today as if it were calculated the same way it was in 1990." In other words, the index uses the same methodology that was in use twenty years ago. the result is an accurate picture of the country falling over a cliff.
Using the same calculations and weighted average to calculate the current annual inflation rate as that employed 20 years ago, the actual current number is near a whopping 10 percent. Anyone that shops for food, buys gasoline or purchases almost any other good or service (except, perhaps electronics) knows that some inflation is occurring. Few know the actual rate.
Meanwhile the federal government and the Federal Reserve both claim that inflation is virtually non-existent. They have denied any increase in Social Security benefits to retirees based on numbers that both know are fraudulent.
They're using skewed numbers based on a purposefully misleading method of calculating the number.
At best they're liars, at worst, criminals.
http://www.shadowstats.com/imgs/sgs-cpi.gif

The real unemployment numbers
As explained by Williams the "Unemployment Rate reflects current unemployment reporting methodology adjusted for long-term discouraged workers, who were defined out of official existence in 1994. That estimate is added to the BLS estimate of U-6 unemployment, which includes short-term discouraged workers."
The result is an unemployment picture that equals the worst of the Great Depression. Using the 1994 standard that was gradually tinkered with to make everything look rosier than it really is (if 10 percent unemployment can be considered rosy), the real seasonally adjusted unemployment rate today hovers at 23 percent. Of course depending on the region, the demographics and the industry, some unemployment is actually pushing over 40 percent.
http://www.shadowstats.com/imgs/sgs-emp.gif

Dismal dollar value
The dollar is not just weak, it's on life support. No wonder so many investors, companies and countries have fled to gold and other precious metals. Williams uses the actual 1985 methodology of calculating the value of the dollar and the 1985 value as the benchmark.

The horrifying truth is that since 1985 the dollar has lost about 50 percent of its value.

Those in the know (and their numbers are growing) realize this number is the real one. This explains the increasing pressure among countries in the world market to dump the dollar as the world trade currency and why more international banks have recently called for a world currency to replace the dollar.
Some Nobel Prize economists have recently warned of approaching hyper-inflation. With the real inflation already in double-digit territory, hyper-inflation could turn the into a banana republic

What is the actual annual GDP growth?
The media is eager to report that, although sluggish, the economy has responded to 's stimulus package with a modest 2 to 3 percent growth of the Gross Domestic Product.
The media is populated with either fools or liars

As Williams' damning chart clearly reveals, the actual annual GDP growth is far from that which has been reported. In fact, the "growth" is not even in the positive territory. The economy is still mired in contraction as the unemployment rate swings higher.

Williams explains, the "GDP reflects the inflation-adjusted, or real, year-to-year GDP change, adjusted for distortions in government inflation usage and methodological changes that have resulted in a built-in upside bias to official reporting."

The numbers are terrifying. During 2009 the GDP collapsed by a negative 6 percent and even now is running at a negative 1 to 2 percent.
No growth exists at all.
http://www.shadowstats.com/imgs/sgs-gdp.gif

Over the past six months a consensus has been reached by many of the world's leading economists: if the government doesn't take swift, dramatic action to reverse its policies, economic Armageddon is just around the corner.
E-mail the URL of this article to everyone you know—Democrat or Republican, it doesn't matter. After all, no one worried about politics aboard the sinking Titanic did they?

And if the goes down, everyone goes down with it.
Sources

Anybody paying attention (unfortunately this is not most Americans) knows that Congress has screwed us for the last 30 years with Reaganomics (aka trickle down). The only thing trickling down is the piss from the richest 1% as they take our money.

Nobody pays attention to the happy talk from the media because the minute we walk out the door and see the for sale signs, or go to the supermarket and watch sugar go up by 40%, we know the talk of a recovery is a lie.

I have spent the last months stocking up on coffee, sugar, liquor and jewelry. Someday soon I will need it to barter for other necessities. We haven't become Argentina yet, but we're getting there.