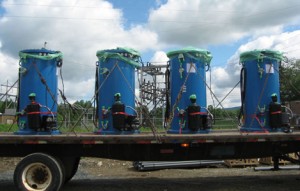 There are many ways to engineer a flywheel farm, but all are as simple as can be.  They all use a spinning mass and I presume magnetic suspension to eliminate friction.
As long as friction is eliminated, one could make flywheels even out of fairly cheap material.  If one is really ambitious one can go for more exotic ideas.  Of course, many of those are light metals but that is all right as the effect improves by the square of the distance which quickly counteracts a loss of mass.
I once calculated that a titanium fly wheel was likely as good as it got.  Today, I would try to spin a graphene laminate up to several times the speed possible with titanium.
I suspect better strategies can be arranged by rim loading a graphene flywheel.
In the meantime, this is a stab at producing an industrial flywheel farm.  Once practice is understood, every power plant will get one to manage their power flow.  They are naturally far more efficient that any battery or reservoir alternative and operate almost instantaneously.
Storing Renewable in Advanced Flywheel based Energy Storage Systems -Stabilizing the Grid
http://www.solarthermalmagazine.com/2010/09/30/storing-renewable-in-advanced-flywheel-based-energy-storage-systems-stabilizing-the-grid/
Beacon Power Corp., a provider of advanced energy-storage systems and services, has signed a contract with the Department of Energy’s Advanced Research Projects Agency – Energy (ARPA-E) to develop components of a flywheel-based energy-storage system over a two-year period. The contract is valued at $2.8 million. ARPA-E grant recipients share a portion of the program cost. Beacon will contribute $560,000, 20% of the $2.8 million program total. 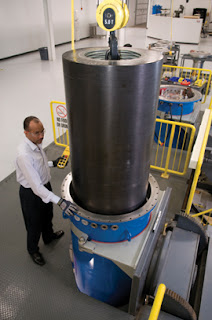 The goal of the development project would be to store four times the energy at one-eighth the cost per kilowatt-hour compared to Beacon’s current Smart Energy 25 (Gen 4) flywheel system. Beacon’s Gen 4 flywheel is currently in production and being deployed on the grid to provide frequency-regulation services. Beacon expects that the ARPA-E-funded flywheel system, if successfully carried through to a commercial product, would be suitable for a variety of new applications.
One new application of particular interest to the DOE is ramping support for solar and wind power, according to Beacon Power.
The goal would be to provide one hour of flywheel storage as an energy-balancing resource for intermittent renewable energy assets and thereby reduce the amount of fossil-based backup power that might be used to provide the same effect.
The future of flywheel storage technology
Seven-foot tall cylinders equipped with flywheel technology (shown above) will make up Beacon Power’s energy storage plant in The company received a $43 million loan guarantee from the Department of Energy to build the plant. | Photo courtesy of Beacon Power Corporation
The electrical grid has been around much longer than other vital technologies, like telecommunications and the Internet. Yet, these systems have become more efficient in significantly shorter amounts of time, while grid technology has sat somewhat stagnant, causing outages, wasted energy and increased power plant emissions. But the Obama Administration’s $3.4 billion investment in “smart grid” technology is changing that.
A good example comes from Beacon Power Corporation, a recipient of a Recovery Act loan guarantee.
First flywheel at grid-scale
The Tyngsboro, Mass.-based company’s innovative flywheel energy storage plant—which is the first of its kind in the world—is expected to improve electrical grid reliability and efficiency by continuously absorbing and injecting electricity, in effect “recycling” it.
The storage plant Beacon is building in , , with the help of a $43 million loan guarantee from the Department of Energy, will absorb electricity from ’s grid when demand drops. It does that by accelerating the rotor to very high speeds to maintain the energy.
When demand increases, the storage plant will inject energy by reducing the flywheel’s speed.
This function is all part of an essential grid service known as frequency regulation.
Changing the grid
“It is certainly going to change the way the grid works,” says Gene Hunt, a Beacon Power spokesman. “No one denies that having the ability to store energy, as well as manage it better, makes sense.”
The 20 MW plant consists of 200 flywheel cylinders, which are now being placed at the outdoor site along the border of and .
The storage plant—which is expected to supply 10 percent of the state’s average daily frequency regulation—is expected to have a 4 MW capacity online by the end of this year, with 20 MW by spring of next year.
About 250 direct and indirect jobs have been created across 10 states because of the project, according to Beacon Power.
Electrical economics
Regulations require grid operators to maintain a certain frequency in power delivery, so that electricity steadily flows to consumers.
However, since electrical supply and demand are constantly fluctuating, grid operators have to signal to certain generators to increase or decrease their output to maintain that frequency.
But this approach has limitations. 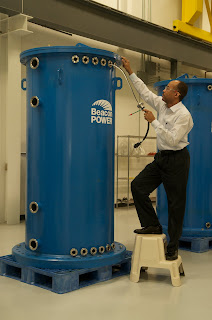 Generators operate most efficiently at a constant output. Thus, changes – fluctuations—in power delivery cause more fuel to be consumed, require more maintenance and result in higher plant C02 emissions. And delivery also takes longer.
“When the operator sends a message to ramp up or ramp down, fossil fuel power plants have up to five minutes to respond,” Hunt says. “When we get a signal from the grid operator to absorb energy or inject it into the grid to keep the frequency stable, we do it in less than four seconds.”
In short, if the energy was being stored—and made instantly available to smooth out these fluctuations in power supply—conventional generators would not have to work so hard and waste energy to keep up.
That’s where the flywheel storage comes in.
“From Flywheel to Full-Scale Plant” video was provided by Beacon Power Corporation.
Green cylinders
Encased in seven-foot cylinders, these spinning flywheels are also ideal for supporting renewable energy sources.
Wind and solar power are considered variable, since the sun is not always shining and wind speeds are not always at maximum.
The variable energy produced by these sources affects grid stability, hence the need for energy storage “shock absorbers,” which can store the excess power or inject some if demand rises.
“The more wind and solar you put on the grid, the greater the need for stability,” Hunt says. “And that’s where we come in.”
The flywheel storage plant in itself is energy efficient.
Beacon estimates that its 20 MW plant will reduce carbon dioxide emission up to 82 percent over its 20-year life compared to a coal, gas or pumped hydro plant that performs regulation.
“The ability to provide a service that would keep the grid stable, reduce fossil fuel consumption and do it in a cleaner, faster, cheaper way has the potential to change ,” Hunt says.
Beacon Power was one of 43 projects selected during this funding opportunity. ARPA-E had received 529 initial concept papers and encouraged 164 applicants to submit full applications.
SOURCE: Beacon Power Corp.
Posted by arclein at 4:00 AM