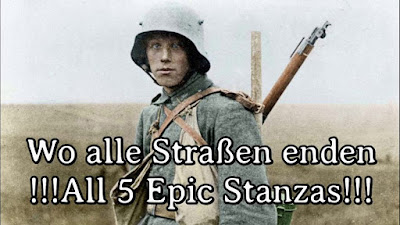 This is a lovely piece of music and poetic expression and it captures a sentiment regarding the closure of the Great War.  It is very much in the spirit of In flanders Fields.
However i had never heard it before and for anything that good that is potentially historic, that is an impossibility.  turns out to be a recent creation and it is still wonderful.
We have a lot of art put out by the victors.  We have little put out by those marching to their inevitable destruction.  Understand that after may 1918, the War was lost.  Also understand that after Kursk in July 1943, the War was also lost.  D Day merely opened a western front against which Germany could not spare real strength.  So they fought a delaying action instead.  On the eastern front, millions of men were engaged desparately trying to stem the russian onslaught.
In the last two years of the War, all soldiers were engaged in a fighting withdrawal that still diminished their strength.  So yes, this song captures the sense of that defeat yet preserves the acceptance of duty to the death.  Perhaps it is fitting that it can be written now as the last old soldiers are passing.
Sing with Karl - Wo alle Straßen enden / Marsch der Verdammten [German Anti War Song]