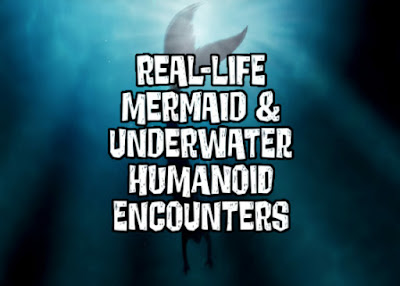 We do not know what these folks saw, but it is all recent.  What it does do is explain the historical genesis of the mermaid mythos.  It is possible to see a living meremaid.  These reports are eyewitness confirmations which are naturally rare.

Not so long ago, i dismissed most reports as fanciful.  Thousands of eyeballs later, i have slowly pieced together a huge complex mosaic of both rare lifeforms and a lot of lifeforms intelligent enough to operate beside us without us the wiser.  Some were likely created along with ourselves as well.

Sasquatch in particular is designed to live free in family bands in the forests.

An ocean adapted human would look like a mermaid or merman and also have sharp teeth in order to eat raw fish.  There has to be some form of gill and the could easily be the mane of hair.  It all looks like human bioengineerring just as those alen greys look like low gravity space adaped humanity.

Funny how the obvious niches have already been occupied?  Again we had from 45,000 BP to 13,000BP to do all this.  Then humanity caused hte Pleistocene Nonconformity to end the Great Ice Age.  Then we were planted to Terra form Terra around 10,000 years ago.  Read Noah and think of the arc as a colonizing space craft.  It is a translation of a report using Bronze Age language.

WE already know technology operates in the sea as ufos.  We are recreating that.  It makes sense for all ufo traffic to end up in an underwater station entrance to a working base.  This provides a natural residence for mermaids as well.

We have been blocked from so much until we get our act together.  The fall from Eden cut us off and we have completely reinvented ourselves now for the second time.  But we have won Terra and this will be paradise on Earth for all our brothers and sisters.

4 different real-life encounters with mermaids or underwater humanoids in Florida and Malaysia. Mermaid sightings off of Florida and throughout the Caribbean have been reported for centuries.

I recently received the following accounts:

"In 1999 I was snorkeling in Coco Beach. I was bumped by what I thought was a shark. I turned to see what looked exactly like your typical mermaid tail. Even though I was behind her or him I could still see arms and hands. I could not see their head though. I'll never forget the colors if the tail. They were extremely beautiful and turned color all over as they moved. Why me? Why I was chosen to witness this marvel? This encounter changed me forever." JW


"I saw a black and orange "thing" surface while boating by myself in 2018 at the outer channel buoy off Cape Canaveral inlet. The thing surfaced 30 meters from my bow. It immediately submerged. I looked for it 360 degrees for 2-3 minutes. Then it surfaced off my stern about 10 meters from the buoy. I imagine it was a giant octopus. The head was conical. I estimate its "head" diameter at 18-24 inches and it rose approximately 36 inches out of the water. It was on the surface no more than 1-3 seconds. Color 80% black and 20% dark orange. Very weird. Perhaps this is the kind of thing that results in people thinking they saw mermaids?" NS

NOTE: These first 2 accounts are similar to others I have received along the Florida Space Coast for over 20 years. Are people really observing mermaids? Your thoughts. Lon

Then things got weird. I had this gut feeling I was going to fall off my floaty and that I should leave. I told my friend we should go back to the shore but she said that everything will be fine. Sure enough, I somehow fell off my floaty. I didn’t know how or why but I just did. Since I didn’t know how to swim, I struggled as I submerged underwater. I felt like I was going to die, so I just closed my eyes while I thought of my family.


Just then, I felt a hand grab my wrist. I thought my friend had came down to save me but I was wrong. I saw an ugly creature right in front of my face and I nearly had a heart attack. The creature was human-like and was very pale and skinny. She also had a tail of a fish. I was so scared words couldn’t describe how much fear I felt that time. The mermaid or siren or whatever grabbed my wrist and pushed me back up to my floaty. When I looked back to see her again, she was gone. My friend asked me what happened but I just told her I accidentally fell of my floaty.

The day after the incident, I decided to tell my friend what happened. I told her about the mermaid-like creature and she somehow believed everything I said. She believed me because when I fell of my floaty, she was about to save me but I just came right back up and saw something swim away. She didn’t questioned me because she was more glad I was okay.

This may sound fake but this really did happen to me. I sometimes wonder if it’s just a bad dream or something but everything felt real." CN


"My grandfather had an experience with mermaids. I'm in Singapore, but he travelled to Malaysia. There, he went swimming with his cousins in the ocean (he was young, about 7-8).


He told me he saw a huge splash an went closer to investigate and see what it was. He initially thought it was a fish. However, after getting close to the splash, he sort of blacked out (the rest is from his cousins point of view).

When he saw my grandfather, something that looked like a woman seemed to be dragging him further out. He immediately swam out, and the creature for some reason seemed to be scared and left my grandfather there. I'm not sure why the creature was scared of his cousin and not my grandfather. Grandad was brought back to shore. Eventually, he went for hypnosis and it was revealed that he saw a lady with a tail swim towards him before he blacked out." MS