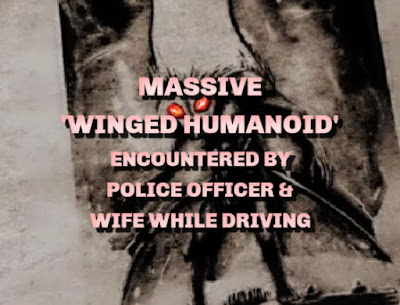 This was in fact a confrontation.  It is also important for two reasons.

The witness is a police officer and is certainly a class A witness.  It does not get better and his wife was along as well.  He also actively responded to end the confrontation.

We got to investigate the behavior of hgte dash cam in real time.  We have unending tales of camera failure.  Here we have direct action confirmed.

Thus we now know that images are actively blocked by the population of cryptids.  It also tells us that the lack of predation on us is no accident.  It is at least way too low.

A police officer and his wife were traveling over a bridge when a massive yellow/reddish eyed winged humanoid suddenly ascends and lands in front of the car.

“I live in Toronto, but have a lot of family in the states, and one of them claims to have actually seen the Mothman. He said it was a creature unlike anything he had ever seen before, covered in hair, with leather like skin, from top to bottom, that had a terrifying screech.

He and his wife were driving home from a night out, and just before they were about to cross the bridge, this thing sweeps down from the sky and lands right in the middle of the road. He said it was around 11 o’clock at night, and there was no other cars on the road. But the weirdest thing of all? His dash cam instantly malfunctioned, and when he played it back, all he could see was static. He was both excited and terrified, because he’s been hearing about the legends for years, and couldn’t believe he was actually having an encounter with it, but was so angry when he noticed that the video didn’t record. He said it was working perfectly up until the moment this creature came from the sky and landed on the road in front of them. As soon as whatever this thing was, flew away, the recording returns to normal, which leads me to believe it’s a paranormal entity, as they are well known for interfering with electronic equipment.

He didn’t dare report it because he thought people would think he was crazy, but I’ll never forget that phone call. He called me first, even though I’m just a distant relative (he said he remembered that I have a strong fascination with the paranormal and the unknown), but I could actually hear the fear in his voice, and his wife was sobbing in the background. He told me that this thing looked like it was absolutely massive, head arms and legs, basically a humanoid type figure. It had no neck, unbelievably huge yellow/reddish eyes that seem to glow in the dark, and a wingspan of at least 10 feet. I assure you that this guy is NOT prone to exaggeration, or making false claims of any sorts. As a matter of fact, he’s a police officer, that’s why he didn’t report it, because he said they get dozens of fake sightings every year, and his colleagues are always joking and laughing about it, but now that he experienced it for himself. He’s hell-bent on figuring out exactly what his thing is, and even though it didn’t hurt them, he said it did appear to be incredibly intimidating, actually walking towards the car as they just sat there in panic. He said a few seconds felt like an eternity, but eventually, as the creature was about 10 feet from the hood of his car, he started honking his horn and flashing his high beams, and that seem to do the trick. He said this thing flew away so fast that it was literally in the blink of an eye, and it was gone.

This happened quite some time ago, yet he has only told myself and two other family members, and refuses to tell anybody else for fear of being labelled a conspiracy theorist, especially given his career. But I believe him, he is an upstanding citizen, and absolutely brilliant man, who actually has three masters degrees. A man of science, who has never believed in anything unusual or paranormal, so I know that he’s telling me the truth. I just wish that he was able to get a video of it. But after the description he gave me, it makes me glad that I’m all the way here in Toronto. I would not want to run into that thing at 11 o’clock at night with nobody else around!” TJ

NOTE: There is no reference to the actually location, other than it occurred in the US. Lon