Ginger can eliminate 10,000x the Number of Cancer Cells as Chemo 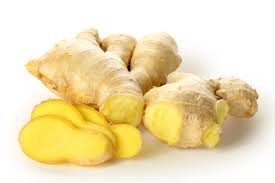 As previously posted  i now like to brew up a fresh ginger, fresh tumeric and pepper concoction for an evening beverage.  I grind about one cubic inch for each root in my blender and then wash it all into a pot to bring it up to boiling temperature andc simmer for a few minutes.  I them strain out the fluid and do it again to produce even more.  Likely i can do this even more.  I then add a quarter cup or so to a pot of tea and sweeten to taste with honey.


It is a pleasant beverage that can be used with coconut milk and with chocolate as well.  The taste is excellent and could lead easily to commercial products.  Turmeric is a powerful colorant and can be opted out when that is an issue.


What i am saying is that it is plausible to concoct a very pleasant hot beverage using ground raw ginger and/or turmeric in coconut milk with a touch of pepper to activate the ingredients.  Honey and cocoa are also easily added as well.   I presently make mine quite strong but suspect that much lighter will allow greater flavor complexity.  The roots need to be stepped to separate the grounds out but then could be both reused and also added to stews and the like.  They are then easy to eat..

Ginger over chemo: This powerful root can eliminate 10,000x the number of cancer cells


(NaturalNews) Inflammation was proven time and time again to be one of the fundamental processes that accelerate illnesses or even cause them to begin with. In basic mechanical interactions, when our body perceives a threat inside of it, it triggers inflammation as a defense mechanism. Together with free radicals, inflammation kills cells in our body. But it doesn't stop at the bad guys. In fact, inflammation is also responsible for extensive friendly-fire at a cellular level.

Our immune system doesn't always discern between actual threats and false-positives. What's worse, long-term inflammation is especially harmful for our bodies, exposing us to a host of diseases and shortening our life-span. Therefore, it's only natural to assume that antioxidant rich foods are an essential-part of our long term health and well-being. If you weren't convinced that the right food can cure you, then you probably didn't know that ginger is one of the most effective anti-cancer cures. How effective? 10,000 times more effective than chemo.


The facts from Georgia State Ever since inflammation was proven to contribute to the on-set and development of the majority of diseases, researchers have been investigating plants that are rich in antioxidants in order to ascertain their effectiveness in both curing and preventing of sickness. Turmeric was among the first ones on the list and its impact in various types of cancer, as well as a swarm of other diseases, is now undeniable. Ginger is a close relative of turmeric, so scientists thought it might be a good idea to take a closer look at its healing properties. Georgia State University did just that in a trial that involved prostate cancer in mice.

What the scientists found out was awe-inspiring. The mice experienced a reduction in the size of prostate tumors by as much as 56% when taking 6-shoagoal, a pungent compound in ginger that is produced when the root is dried or cooked. By comparison to the treatment of control subjects, ginger proved to be a staggering 10,000x stronger. But the good news doesn't stop here. Particularly when it comes to prostate cancer, this root helps patients avoid death, unlike the chemotherapy that promotes a weakened immune system and even the metastasis of cancer.

With chemo, living tissue is bombarded with chemicals and cells die. However, as a result of the local damage, there is a significant possibility that the tumors will come back with a vengeance and spread throughout the body. Most of the times, this is what happens when a patient undergoes chemotherapy, which is why some in the medical community are so eager to find better treatments that are less likely to worsen an individual's state.


The hand that heals you Regardless of how medicine tries to manipulate cancer, it never seems to get better. Maybe the cure lies elsewhere. It's quite disturbing that thousands of oncologists around the world still recommend drugs to patients who are in the early stages of this disease, especially since nature has given us the strength and means to fight off most of the illnesses we are faced with. In spite of this, we persist to cling on to chemicals that are not only ineffective but also highly likely to generate even more damage.

Besides slowing down cancer, ginger was proven to be effective for over 100 other ailments, including diabetes, osteoarthritis and chemotherapy-induced nausea. Another good reason why you should definitely try it is the fact that it comes with virtually no side effects. Unlike chemo, ginger acts like as a remedy. Chinese medicine started using it to treat patients over 2,000 year ago. Surely they didn't just discover it and then continued to use it in clinical circumstances for no reason.

While it may be some time before general practitioners examine patients and write a nutritional prescription that addresses their diet, we're definitely getting closer. Drugs and chemicals generally do more harm than good to our long-term health, so why not help the immune system fight illnesses on its own, the way it's meant to?

GreenMedInfo.com
Posted by arclein at 12:00 AM