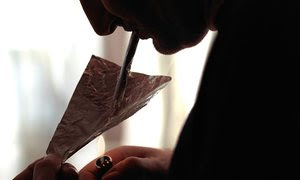 In the end, even the cops have become exhausted. Again considering that the whole edifice of the War on Drugs goes back even to prohibition and the sideways jump into making marijuana illegal, it must be understood that this has always been their job promotion scheme and never a meaningful resolution of a problem.

Think of the resources Hitler squandered in the final solution while losing a war.  In fact the War on Drugs underwrote the whole criminal infrastructure top to bottom.  It would not exist at all otherwise.
Thus bad policy inflated our police force and allowed massive State incarceration as well as an additional burden on the public purse.  What a more perfect fraud.


Worse, they damn well knew it as well.  The naive likely thought otherwise, but experience would soon eliminate that weakness.

.
Campaign group led by police officials calls for rethink on war on drugs

Former and serving police officers and officials from Britain, Europe and the US have told politicians in Westminster that the “war on drugs” is lost and they must take the trade out of the hands of organised crime.

They called for an evidence-based approach to drug use in the UK that seeks to not only minimise harm but also allow for the potential benefits that certain illegal drugs can have.

Ron Hogg, police and crime commissioner for Durham, who is well known for instructing his force not to prioritise the prosecution of drug users, said it was time to give up on the war on drugs.

“We are very clear in our view at Durham constabulary that war has failed, it was never likely to succeed and never will succeed,” he said, while standing alongside Mike Barton, the chief of Durham police.

“What we have to do is we have to change our views, we have to change the way in which we approach things. The whole purpose of any drugs policy must be to minimise the harm that those drugs cause to individuals, to our communities. It also needs to optimise the benefits that drugs could bring,” he added, referring to the medicinal uses of cannabis.

Hogg made his comments at the launch event at the House of Commons for Law Enforcement Against Prohibition (Leap) UK. First formed in 2002 by five former police officers from Canada and the US, the international organisation is now a UN-accredited NGO with about 180,000 members and supporters in 80 countries.

Neill Franklin, a former major in Maryland state police and executive director of Leap, said: “Leap’s mission is to reduce crime, disease, death and addiction by ending the most socially destructive public policy since slavery, that is the war on drugs, the prohibition of drugs.


“For over five decades, we have been attempting to solve a public health crisis with criminal justice solutions and the results are catastrophic.”

A recurrent theme among speakers was the harm caused by the war on drugs, as opposed to the drugs themselves. Peter Muyshondt, the director of operations of local police in Voorkempen, Belgium, told how he had been thrown into a moral conflict after his brother died of a drug overdose nine years ago.

He said: “As a policeman, I have had to deal with more alcohol-related problems than with problems relating to cannabis. Not only in traffic, but in situations of public order, alcohol is frequently involved when it comes to accidents, fighting or public nuisance. But it’s the national culture.”

Speakers reiterated the inconsistency between alcohol, and the social damage that causes, and the ban on drugs, which have less negative impacts.

“If we think alcohol is that bad, why don’t we ban it? Because it won’t work, and you should take the same view on drugs,” he said.

Harms associated with drug use in itself could be mitigated by liberalisation, said Jim Duffy, a former inspector of Strathclyde police and one-time head of that region’s Police Federation.

He said: “The thing you have to remember about your drug dealers is they are the people who decide what drugs they will give away or sell to your children and to your grandchildren.

“They are the people who decide what it’s cut with, what the purity will be, what the strength will be, the effect. They don’t ask for ID. They will sell it to whoever has the money. That’s a shameful situation.”

Franklin said he hoped that just as the UK had shown leadership in ending slavery in the 1820s, so the country could also show leadership on ending the war on drugs, with its disproportionate focus on minorities.

He likened the current era’s drug policies to the Jim Crow laws, which southern US states used as a means to legally target black people and throw them into jail where they could once again be used as slave labour. The current drug laws had a similar effect, he said, in disproportionately jailing black and minority ethnic offenders, even though white people abuse and traffic drugs at about the same rates.
Posted by arclein at 12:00 AM