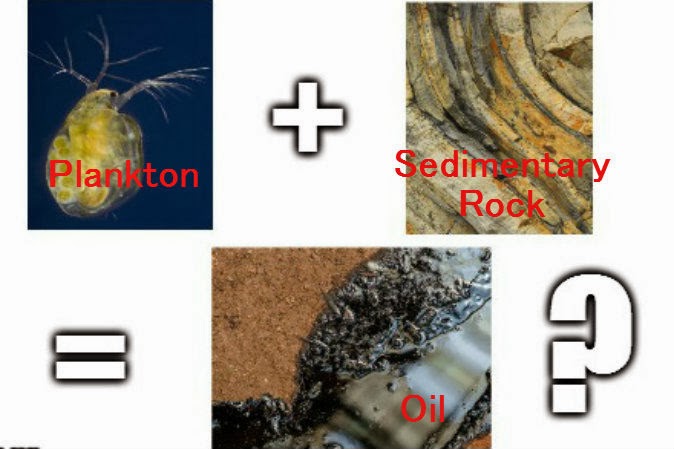 It is noteworthy to see that this debate is hardly ended and that application of adiabatic thinking has located major oil fields were such are exceedingly unlikely.

I personally suspect that the first hundred miles of crust contains vastly more carbon that we have ever accepted.  This surplus content is simply oxidized away in the lower temperature upper skin of the crust.  Thus continuous outgassing of hydrogen from the core would naturally pass through this carbon rich crust and reform as hydrocarbons.

The hydrogen may even be replenished continuously through nuclear decay in the core.  These are just suggestions that need to be followed up but cannot be dismissed out of hand.

Such a geological regime would sustain hydrocarbons supply beyond our wildest expectations.

http://www.theepochtimes.com/n3/553775-soviets-think-americans-are-50-years-behind-in-scientific-understanding-of-oil/
Most people are taught that petroleum was formed in the Earth over the course of millions of years, made out of the remains of plankton, plants, and other living things that died. This explanation is stated matter-of-factly on American government and educational websites.

This theory of oil formation is, however, exactly that—a theory. And there is an opposing theory that also has some substantial evidence to back it up.

Where Did All That Dead Stuff Come From?

When a plant or animal dies, very little of its matter is buried. Nature recycles—some of nature’s greatest recyclers are insects, micro-organisms, fungi, and bacteria. Has enough organic matter really been buried in the Earth to create trillions of barrels of oil?

According to the biotic theory, that organic matter must also fit within the “oil window” before becoming oil. The oil window refers to a set of conditions, including reaching a particular depth (1 to 2.5 miles) at which the temperature is right (140 to 300 degrees Fahrenheit) for oil production.

Proponents of the alternative, abiotic theory, say oil may instead be a primordial material that comes up from the Earth’s depths through fissures. They say oil could be formed independently of organic material through chemical processes, much like methane, which is found on asteroids and in other barren environments.

Skeptics say methane is a more simple substance than petroleum; the process of forming the hydrocarbons in petroleum is more complex and the same logic as is used for methane does not necessarily apply.

Thomas Gold of New York’s Cornell University, who died in 2004, was a vocal advocate for abiotic theory. He advised a team that drilled in central Sweden in the late 1980s and early 1990s. The site, known as the Siljan Ring, would have been seen as unpromising to say the least by surveyors working from a biotic theory perspective.

Conventional oil exploration sticks to sedimentary basins. It is believed that plankton would sink to the bottom of bodies of water when they died and were buried in sediments. These sediments would get forced down over time until they reached the right conditions, the oil window.

The Siljan Ring, on the other hand, was not rich in sediments. What sediments were there, said Gold, were no deeper than 1,000 miles (300 meters), while the drilling was done at a depth of 3 to 7 miles (5 to 7 kilometers).

Albeit the drilling did not find the “gas field of world class dimensions” Gold predicted. It found 80 barrels of oil, which was enough for Gold to feel vindicated and enough to make some scientists consider the matter. Of course, conventional drilling also doesn’t strike it rich every time surveyors think an area looks promising.

Some said the oil seeped from the sedimentary rock into this area. Gold retorted: “Oil seepage generated after 360 million years from such a small quantity of sediments seemed improbable.”

One of the main proponents of abiotic theory, Professor Vladilen A. Krayushkin, Chairman of the Department of Petroleum Exploration at the Ukrainian Academy of Sciences, is quoted in a 1996 paper by Dr. J. F. Kenney titled “Special Edition on The Future of Petroleum.”

Krayushkin said: “The eleven major and one giant oil and gas fields here described have been discovered in a region which had, forty years ago, been condemned as possessing no potential for petroleum production. The exploration for these fields was conducted entirely according to the perspective of the modern Russian-Ukrainian theory of abyssal, abiotic petroleum origins.

“The drilling which resulted in these discoveries was extended purposely deep into the crystalline basement rock. … These reserves amount to at least 8,200M metric tons [more than 57 billion barrels] of recoverable oil and 100B cubic meters [328 billion cubic feet] of recoverable gas, and are thereby comparable to those of the North Slope of Alaska.”

On Eugene Island in 1995, it seemed the oil fields were—perplexingly—refilling themselves after depleting. The findings of Dr. Jean K. Whelan, part of a U.S. Department of Energy exploration program, seem to support to the abiotic theory. She found that the oil likely came from great depths, as the abiotic proponents would suggest.

A New York Times article from that time explained: “[Whelan] has found evidence of differences in the composition of oil over periods of time as it flows from greater to shallower depths. By gauging degradative chemical changes in the oil resulting from action by oil-eating bacteria, she infers that oil is moving in quite rapid spurts from great depths to reservoirs closer to the surface.”

Whelan, like Gold, met with skepticism. One of the major arguments against abiotic theory is that oil migrates with water in the ground, thus explaining oil found in places that might be unexpected, places without sedimentary rock. This is also how some skeptics explain the weird uniformity of oil found in different types of rock formations of different ages. It comes from the same source rocks and seeps to other places, they say.

Petroleum engineer and consultant Jean H. Laherrère wrote a detailed refutation of Gold’s arguments point-by-point. Gold had already died, so he was unable to respond, though Laherrère said Gold was surely aware of these points while he did his research.

For some of Gold’s points, Laherrère provides alternate explanations rather than directly disproving them. Sometimes he seems to take Gold’s comments out of context or treat them as standalone arguments for abiotic theory. The paper does highlight, however, the two sides of the argument. Many of his responses boil down to the argument that the oil may have migrated from sedimentary rock to the locations where it was discovered by researchers using the abiotic theory.

The presence of certain metals and helium in petroleum are also explained differently by the two sides.

Since oil takes millions of years to form and no one has witnessed it first hand, whatever evidence may be presented on either side, it is difficult to say with absolute certainty how the oil got there. If the abiotic theory proves correct, it could have great implications for the energy industry. If oil is produced in such a way that the process can be replicated, this “fossil fuel” may become a renewable energy source.

In a Cornell article written after Gold’s passing in 2004, Gold is quoted “I don’t enjoy my role as heretic. … It’s annoying.”

The article further states: “Indeed, despite the intense opposition they often encountered, many of Gold’s most outrageous—and passionately held—ideas had a curious habit of turning out to be right.”

His theories about the human ear’s mechanisms for hearing, about the nature of pulsars in space, and about the existence of fine rock powder on the moon were all scoffed at for decades before he was vindicated and they became widely accepted.

Gold is compared to famed astronomer Carl Sagan, whom Gold was responsible for bringing to Cornell in 1968 after Sagan was denied tenure by Harvard. The Cornell article quotes Keay Davidson’s words from a 1999 biography of Sagan “Gold epitomized Cornell’s openness to offbeat geniuses.”
Posted by arclein at 12:00 AM

We have observed the abundance of similar hydrocarbons on many other planetary bodies viz. comets and moons (eg. Titan) etc. which are thought to have been formed without any involvement of any biological material . The common association of hydrocarbons with the inert gas helium is also not explainable in current theory of biotic origin of petroleum. We have observed presence of some traces element like V, Ni, Cu, Co, Zn.. etc in hydrocarbons which also do not clearly explain the biotic origin of petroleum ( szatmari et al,2005). According to the author of the paper ,they have analyzed 68 Brazilian oil and nine foreign oils and determined 24 metal traces in the oils showed fine correlation of the oils with CI chondrite and mantle peridotites, and worse correlation with oceanic and continental crust, and none with seawater. No doubt, the biotic theory has some important evidences but on the other hand the followers of abiotic theory also have strong evidences which cannot be denied. So we require a new theory that can reconcile the strong evidences of both the current theories. Taking strong evidences of both the theories we can easily conclude it.
Majority of commercially interesting hydrocarbons accumulations have been formed from the organic rich sedimentary source rocks but essentially from those which has been formed with the involvement of abiotic hydrocarbons. And these abiotic hydrocarbons were once hugely present on the surface of the earth in past geological time. Sedimentary rocks that have been formed without any involvement of these abiotic hydrocarbons are not suitable to form commercial hydrocarbons deposits. So abiotic sources are the major contributor in the commercial accumulations of hydrocarbons. Hence a well balanced theory is today’s major requirement which will help future hydrocarbon exploration efficiently.