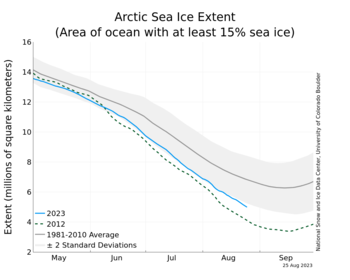 What we have seen clearly developed is an Arctic minima which is matched by an Antarctic Maxima.  This surely implies that the net global change is close to zero or is even zero.

As well this apppears stable enough and will possibly remain in place for some time as other maxima have.  I am thinking in terms of at least ten more years.  Our best available indicator will be the Antarctic which appears to provide a clean signal.  I think that a conjecture linking these two events will win the day and i am now satisfied.


On September 17, Arctic sea ice reached its likely minimum extent for 2014. This is now the sixth lowest extent in the satellite record and reinforces the long-term downward trend in Arctic ice extent. Sea ice extent will now begin its seasonal increase through autumn and winter. Meanwhile, sea ice in the Antarctic has surpassed the previous record maximum extent set in 2013 and is now more than 20 million square kilometers (7.72 million square miles) for the first time in the past thirty-five years. It is too soon to determine if Antarctic sea ice has reached its annual maximum.


Please note that this is a preliminary announcement. Changing winds in the Arctic could still push ice floes together, reducing Arctic ice extent below the current yearly minimum. NSIDC scientists will release a full analysis of the Arctic melt season, and discuss the Antarctic winter sea ice growth, in early October.

On September 17, 2014, sea ice extent dropped to 5.02 million square kilometers (1.94 million square miles). This appears to have been the lowest extent of the year. In response to the setting sun and falling temperatures, ice extent will now climb through autumn and winter. However, a shift in wind patterns or a period of late season melt could still push the ice extent lower. The minimum extent was reached two days later than the 1981 to 2010 average minimum date of September 15.