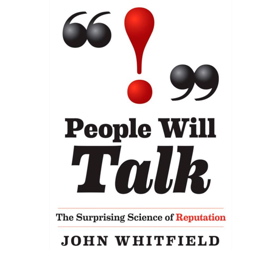 It is a bit disconcerting to realize that one out of a hundred is a psychopath.  The good news is that few actually rise to serious positions in society mostly because that ultimately entails establishing chains of trust.  Those making it past that hurdle are that much more dangerous.

It is enough to say that I have met my share but found an effective sieve was to simply postpone a decision for three months.  That was good enough to flush out the majority without them ever knowing.

We now have evidence of a biological shortcoming underlying the actual syndrome and perhaps we can expect a reduction in the damage done by these individuals.  The good news is that the majority show themselves far too fast and can be handled but never trusted.

How to Act Like a Psychopath without Really Trying [Excerpt]

People who don't care—or don't need to care—what others think of them show how crucial reputation is to civilization. Understanding it could reduce crime, improve ethical behavior and rein in Wall Street excesses

Editor's note: The following is an excerpt adapted from the book, People Will Talk: The Surprising Science of Reputation, by John Whitfield (Wiley, 2011). Copyright © John Whitfield

About one in every 100 people doesn’t care what others think of him. These people are hard to spot. They are usually physically healthy, and their intelligence is often above average. Yet, in the words of one psychiatrist, they lie without compunction, cheat, steal, and casually violate any and all norms of social conduct whenever it suits their whim. They have no concern for others’ suffering, no remorse when caught, and punishment does little to change them. They are called psychopaths.

Mental-health professionals have usually treated psychopathic behavior as a disorder—a large proportion of the prison population, after all, has been diagnosed with some version of the trait. But viewed from an evolutionary angle, psychopathy looks more like a feature than a bug. Most people are cooperative, trusting and generous. This pays off in the long term. It also creates an opening for those who would rather prey on society than join it.

A psychopath’s deceitful, manipulative, and callous nature equips him (it’s several times more likely to be a “him”) to fill this niche. Psychopaths’ deficit is in empathy, not reason. They understand morality, but they are immune to other people’s emotions. There aren't many openings for psychopaths, because if there were lots of them, there would be no society to plunder. Evolutionary biologists call this frequency dependence: it means that the rarer a trait becomes, the more it pays off. This advantage when rare makes the trait more common, which reduces its advantage. The effect is to keep multiple traits in balance. Sex is one example of frequency dependence: if males were more common than females, they would be less likely to find a mate, so it would pay to have female offspring, pushing the sex ratio back toward equality. Similarly, mathematical models suggest that if antisocial behavior is rare enough, it can prosper.

The benefit of psychopathy is that you exploit the altruistic without the cost of reciprocating. The downside is that you can cheat a person only so many times. Your victims will also warn their friends about you, and they may seek revenge. So a psychopath must stay one step ahead of his reputation.

Signs of the psychopath

Psychopaths’ psychology reflects this. They are often drifters. They have a dread of commitment in work, friendship, or romance. They go for the quick buck and the one-night stand. They are impulsive and uninhibited, and bore easily. A psychopath is someone who lives fast and does what he can to escape the consequences.

A few of us are psychopaths, and a few of us are saints who would never do a bad thing. Most of us are somewhere in the middle. We are predisposed to cooperate, but, unconsciously or not, we also weigh up the benefits of cheating against the likelihood and consequences of getting caught. Concern for our reputations is one thing that nudges us toward the saintly end of the spectrum.

Yet not every environment triggers the same concern. In a small village or a hunter-gatherer group, everyone knows everyone else’s business. There’s slim chance of getting away with anything. It’s easy to resist temptation in such an environment, and antisocial behavior is relatively rare in such communities. Urban life, on the other hand, is much more conducive to cheating. It’s no mystery what conditions make reputation powerful and encourage good behavior: transparency, accountability, and interdependence. Secrecy, impunity, and isolation do the reverse, making antisocial behavior more profitable.

Politicians are probably no greedier than other Britons. The problem was that MPs thought their claims were secret—and they fought to keep them that way—so short-term self-interest drowned out the voice of reputation. Because most of their colleagues were doing the same thing—more than half of MPs put in excessive claims—there seemed to be no risk.

Every elected official, though, relies on connections reaching beyond the political bubble, in the form of voters. When the expense claims were revealed these connections became conduits of outrage. Peter Viggers, who claimed £1,600 ($2,500) for a floating duck house for his garden pond, described himself as “ashamed and humiliated” (shame being the pain of a damaged reputation). He was one of more than 120 who decided to stand down at the 2010 election, the most retirements since World War II. Attempts at reform have been criticized as piecemeal and grudging, yet the affair's emotional impact is undeniable.

No apologies from investment bankers

In contrast, look at how investment bankers have responded to the stratospherically expensive rescue of their industry. The drop in their reputations was every bit as precipitous as it was for British MPs. And yet judging from the bonuses they continue to reward themselves and their efforts to resist regulation, they are unabashed. The journalist Andrew Ross Sorkin has said that when he asked leading figures in the industry whether they felt any remorse, “The answer, almost unequivocally, was no.” Bankers, he says, see themselves more as “survivors” of the crisis than its cause.

British MPs could say the same. Yet while politicians have to worry about their reputations with the public, bankers have few ties to non-bankers, working long hours and socializing mainly with their colleagues. They don't need to worry about those on the outside, and within banking, the behavior that led to the meltdown was somewhere between normal and virtuous, so no need to feel bad. If some bankers look like psychopaths, that’s not because they're bad, it's because they don’t need to care what we think.

The chance to make a lot of money quickly is another reason to behave selfishly. The economist Will Hutton blamed the banking crisis on huge bonuses that “trashed the need for individuals to worry about integrity.” Such people, he wrote, “don’t need to be concerned about their reputations; they just need one deal or one year at the top and they need never work again.”

But you can overestimate the power of this temptation. British MPs sold their reputations for a piffling return—one MP submitted a claim for a hot drink he had bought in the House of Commons tearoom. Psychological experiments suggest that pretty much everyone, psychopaths aside, cares about what others think of them. Even people who before the experiment say they don't care about public opinion suffer a knock to their self-esteem if they are snubbed in the name of science. And, perhaps most important, status is relative: if everyone you know makes $20 million, walking away with your $5 million will feel like failure.

The problem with too much money

Extreme wealth damages society not because it corrupts, but because it isolates. Inequality severs connections, splitting people into groups whose members cannot influence one another. This may be one reason why more unequal societies suffer more crime and mental illness, regardless of their wealth. Making connections, on the other hand, forces people to confront the consequences of their actions. Restorative justice, in which criminals meet their victims, has a good record of preventing re-offending, and a project called Operation Ceasefire, pioneered in Boston and applied in other cities in the U.S. and U.K., has reduced gun- and gang-crime partly by bringing victims and perpetrators together. Our social natures make it harder for us to hurt people we see as like us.

The problem in the financial sector was not that its members sold their reputations. It was that reputations were not at risk. The incentives to gamble so dwarfed the penalties for failure that it was difficult for anyone, regardless of how dishonest or incompetent he might be, to damage anyone else. This gave bankers little reason to worry about their professional reputations, and little reason to regulate themselves. In contrast, the British expenses scandal caused a backlash against all mainstream politicians. The guilty dragged down the innocent, giving everyone a reason to reform.

In a prescient article written in 2005, the banker Stanislas Yassukovich said that investment banks had come to see scandals as an advertisement, rather than an indictment. “Reputational risk is no longer a meaningful element of corporate policy,” he wrote. “It is no longer a question of knowing right from wrong; it is a matter of knowing what you can get away with and what might be the cost of getting caught.” When the answers to these questions are, respectively, “plenty” and “not much,” it’s hard for anyone to behave well.

When we don’t cheat, it is often because the environment makes cheating a bad move. The challenge for governments is to align the financial sector's self-interest with the public good]. If bankers were better connected to the rest of us, and if they harmed themselves — or better still, each other — when their decisions harmed society, they would police one another more keenly. Several banks have begun paying bonuses in shares that can be cashed in only after a number of years, to give employees a stake in the long-term health of their institutions. Perhaps even more effective would be to give them shares in one another’s companies, so that a fund manager was tending the bonus of the guy up the street. That might make money’s mad scientists think twice before blowing up the lab.

ABOUT THE AUTHOR(S)
John Whitfield is a London-based science writer.
Posted by arclein at 12:01 AM

Really, arclein? Are you truly that naive?

This world is being run by psychopaths, and those too blind to see that are part of the problem.