Niche of the Burrunjor 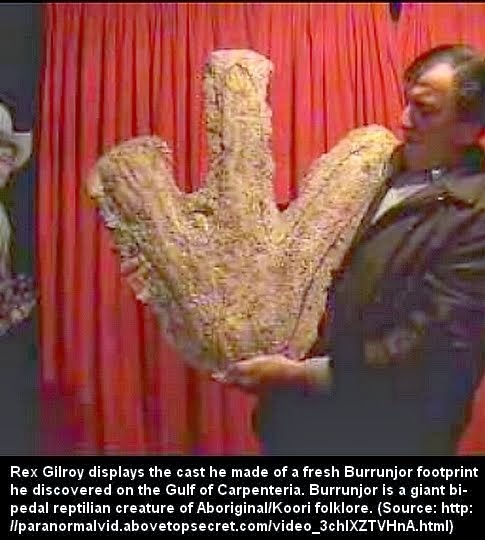 The possible presence of a living theropod in the tropics of Northern Australia was a bit of a shock and I have since had time to reflect and some interesting inferences suggest themselves.

The continent of Australia included Papua – New Guinea until about twelve thousand years ago. This block was and is cut off by deep waters from the remainder of the globe and has been since the age of the dinosaurs. That means that the only place on Earth that had any chance of retaining a markedly different suite of plants and animals was this region. Every where else was eventually over run by the Eurasian biome.

There were four separate tropical zones suitable for the survival of theropods. Obviously Africa and South America and then we have the island arc and continent of Indonesia and Australia, neatly cut into two separate zones. Even more important, Yucatan which was the site of the asteroid impact that ended the age of dinosaurs was on the opposite side of the globe from the jungles of northern Australia. That was simply the best place to survive the initial shock and as it turned out the place where a more restrained evolutionary development took place.

The evidence so far is also very instructive. The animal is non migratory and generally slow moving compared to its obvious upland competitors. It did not run down game, but certainly was able to take out a cow and carry it off. That is no big trick. So could you. It probably runs as fast as we do.

That means that it operates inside a hunting range and this is supported by the pattern of losses and the behavior of dogs who immediately recognized the range of a superior predator. The terrain descriptions so far are of tropical woodlands with a low canopy and dense ground cover. This is difficult to travel through and see anything.

That leaves only the important question that should have been understood a century ago. What does it eat? It cannot run down herds of Kangaroos, nor can it prey on large herds of grazing dinosaurs that these hard cases likely hunted to extinction in their refuge a few million years ago. However, it is the perfect hunting machine for eating crocodiles and alligators. With its huge legs and weight, it can leap onto the back of such a reptile and use its jaws to crush the prey to death.

The rivers are full of such game and the hunting area can be small. You can also be sure that nosy little primates will stay far away. Thus we have almost unlimited food and secure hunting areas along rivers. No wonder they are still with us. That begs the question of survival in the Congo and the Amazon. They could have and we certainly were avoiding them anyway.

Now we understand their biological niche, it should be possible to stake out districts and to run one down. Carefully of course, as no human in their right mind will go personally into such an area on foot.
Posted by arclein at 12:01 AM