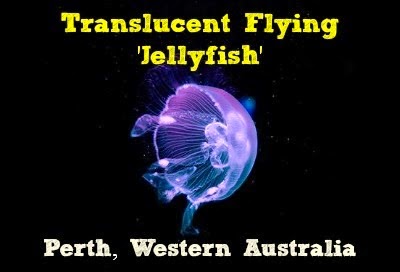 Two or theee years ago we developed a conjecture describing the plausibility of a slime mold creature that consists of a potentially very large gas bag holding methane.  I suggested that these would produced in swamps, but then rise naturally even up into the atmosphere.  This was a pretty wild conjecture because none had ever seen anything like that.

I drew from remnants on grass near ponds and known high level gas bag like UFOs bouncing around in the wind currents that appeared likely to be unpoweered.

Now we have a confirmed witness report that describes exactly what I expected.  I am having better luck with this conjecture than a good camera shot of the amazingly elusive Sasquatch who obviously do not trust us...

Back in November 2013, I received the following report from a reader in Western Australia:

This took place in Perth, Western Australia around 12 months ago now. I am only just reporting it after seeing similar reports coming in.


One night I was outside having a cigarette (quit now) andlooking up at the sky, when something caught my eye as it flew over the stars and disrupted the light pattern slightly.


It was completely silent and it was just coincidence that I was there at the time to see it. At first I thought it might be some sort of plane as it was still, roughly, a few miles away at least. As it got closer, the way it moved resembled the way a jellyfish would swim if it was horizontal.


It was hard to describe, but it looked to be expanding at the front like a balloon, then using that air to propel itself along. It was roughly 100 meters above me and I watched it for 10 minutes. After that it was out of sight. This was during a clear night sky in Australia. I am very familiar with aircraft as I live relatively close to Jandakot airport and we see/hear them all the time. It was certainly not a machine of any kind. I yelled out to my Mother-in-Law who was staying at the time to come out and look. She also saw it. I filmed it on my smartphone, but being 8pm at night it was pitch black and you couldn't see anything.


If I had to guess, I would say the feeling I was left with is that it was some kind of creature. It moved gracefully and gradually in large deliberate movements. Like a large bird would do with a large flap of its wings, then gliding for a bit, although this was unlike anything I could describe. It appeared to be translucent in parts and remained at the same altitude and speed but just completely silent. -

BDNOTE: I'm starting to wonder if the flying 'ray' cryptids and the flying 'jellyfish' cryptids are related somehow? Translucent with deliberate movements...never too far from water. Is this a worldwide phenomenon? Lon

The reason why this report is being posted again is because last evening, I received a confirmation of the same phenomenon:


I would like to confirm the story of the flying jellyfish like creature as described on your forum by "BD," There were two of us actually not just myself. We were in Perth CBD actually having a glass of wine on a quite loud jazz music playing balcony about 10 meters from the ground. I am so thrilled to find out there is another person who has seen this. The creature was behaving exactly as described by "BD" so basically like jellyfish but without any long tentacles - about a size of a balloon. It was kind of changing according to the different colored lighting attached to the balcony and it was flying upwards so effortlessly. It is really precious I have finally found this. I have been searching for so long. I have to be honest I don't recall the exact day but it must have been the same night as "BD" mentioned. We had seen it around 9-10pm either friday or saturday. The creature wasn't too shy either meaning it didn't fly in a hurry. Would gladly put my hand on my heart on this one and now may actually try to find it again, but who knows how often do they appear . 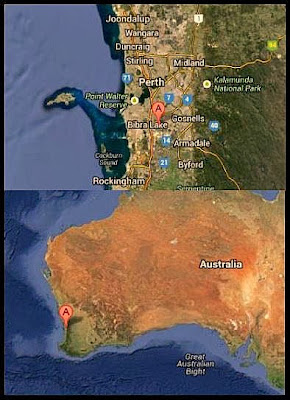 I can vouch for BD and MP.

I live in Syd, Australia and I have seen something VERY similar to what has been previously described.

It was around 8-9pm when I decided to buy some snacks at the local Woolies with my sister. As we were walking down the street, my sister noticed something floating beside the telephone wires on the opposite side of the street. It was completely silent. As I looked across to where my sister was gawking, I saw something I have never seen before.

"It" appeared to glide down the street with us at walking pace. It even went through a few tall trees that blocked it's path. At first it looked like a plastic bag floating through the wind. But as we began to keep our eyes on it, what we saw was a translucent black/maybe dark substance, about the size of a kite.
Naturally, I grabbed my phone to take pictures but as you know it's quite difficult to capture something at night, with no lights and see-through.

As we continued to walk down the street, I noticed that it could spin and even alter it's shape. It did not appear solid, so I assume it was a gas-like substance. I also noticed what appeared to be a VERY THIN, (almost invisible!) 1meter long tail that looked similar to that of a stingray. (keep in mind my sister says she saw no tail). The tail appeared and disappeared at times, only being used when it spun itself.

Once we had almost reached the end of the street, It began to slowly float higher and higher into the sky until our eyes could no longer see it. It passed through clouds, moved with the wind and disappeared without a single trace of sound.

My sister and I did not seem to have an affect on it as it carelessly drifted off into the night. This night became the night I truly began to acknowledge the FACT that we are not the only species that is curious about what's out there.