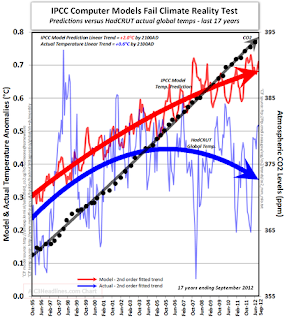 The bad news for our true believers is that after a dozen years of effectively flat lining about a half degree above the Holocene Norm while the CO2 rise continued unabated whatsoever, it has now begun to fall. This probably reflects the Antarctic maximum been achieved and plausibly injecting cooler waters into the Atlantic basin. This down tick may even turn out to be quite sharp before it is finished.

Watching this happen also gives us a tentative explanation for the abrupt temperature declines observed at the onset of the so called little ice age. In fact I think the expanded Antarctic maximum is the real and present climatic threat. This could be the long term climate driver that is missing. During this period, CO2 rose about ten percent on a global basis (+ 30 ppm from 365 ppm) which likely matched the entire previous increase that was been relied on.

Obviously declining global temperatures with the decadal temperature plateau makes the CO2 linkage just stupid and the global warming argument undefendable. The interesting question will be if an injection of cold water into the Atlantic Basin can also act to sharply reduce CO2 content.

The most recent global temperature record, released this week, shows the average global temperature fell last year for the second year. There is now general agreement that the rising trend has stalled. This is the background against which governments will meet in Doha to negotiate a globally binding agreement to cut carbon emissions, as agreed at last year’s meeting in Cape Town, South Africa. --Graham Lloyd, The Australian, 24 November 2012
Posted by arclein at 12:00 AM

For the temperature to be in decline for a second consecutive year was expected. The figures for the instrumental record (NASA GISS temperature anomaly) reveal an oscillating pattern that shows the beginning months of years that are numerically wholly divisible by four (1964, 1992, 2000, 2008, 2012) are the low points in the trend. Conversely, the mid-years in this group (1990, 1998, 2010) tend to show the opposite. That is what a trend is; an assessment of just one year is not good enough to pick apart the record. For this year, the figures nonetheless show a very high low point.

It is possible that future temperatures could decline, on account of various factors, along with the anthropogenic climate change; the AGW would offset a more severe decline. Otherwise I would expect to see an average of 14.80 for the first half of 2010s alone.

You might wish to use as your sources sometjhing other than sites that are knwon to lie and create data out of thin air. The web of trust rates your source as untrustworthy. Of course I am sure that WOT is just part of the grand conspiracy, like the insurance comapnies who are re-setting their rates in light of global warming. And since insurance involves money, they are probably part of the zionist conspiracy also.

In fact, the actual data, from the actual sources of the data show continual increasing temperatures. And continual melting of ice all around the world in cluding both poles.