Why Benghazi Matters with David Frum 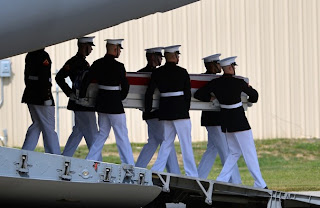 The bad news is that the president has much to hide and obscure.  It is not just that the consulate was the most obvious soft target available that plainly needed defending, but that the nature of the attack was then covered up by the guilty parties.

The president is attempting to avoid a public review of his actions and inaction in the generally where he has much already to answer for.  In truth, the ambassador was not properly defended, and his hidey hole was no good.

My sense now is that something awful will come out of all this and likely through some inconvenient leaks.  It no longer will take much for Mr. Obama’s fitness to be president to be questioned.

Barack Obama got super lucky in the second presidential debate last week. Mitt Romney made a rare mistake, and the president took brutal advantage. Clever advantage too, for the governor’s mistake enabled the president to side-step what otherwise would have been a discussion that is deadly dangerous to him.

Romney’s mistake, of course, was to assert that the president waited 14 days to use the phrase “act of terror” to describe the Sept. 11 attack on the American consulate in Benghazi, an attack that killed four Americans including the ambassador to Libya.

You can see why Romney made his mistake, but a mistake it was. On Sept. 12, the president had said this: “No acts of terror will ever shake the resolve of this great nation, alter that character, or eclipse the light of the values that we stand for. “

People familiar with the language of presidents will understand what Obama was doing here. Notice he did not say: “This act of terror.” Instead, he offered a statement of principle about acts of terror in general, avoiding mention of whether the particular incident in happened to belong to that category.

The president’s words gave him deniability in two directions: He protected himself against Republican charges just like the charge Romney leveled at him, while simultaneously refraining from any definitive characterization of the attack as terrorism.

The language was ambiguous — and intentionally ambiguous. (A statement like this would have been reviewed by at least a dozen senior White House staff, including both political and counter-terrorism advisers, and then circulated to relevant officials at State, CIA, Defense and maybe the Department of Justice, too.

Still, Romney led with his chin, and the president walloped him. By delivering the wallop, Obama also prevented the follow-on challenge before it could even be framed, and that challenge was this:

Why was the administration so eager to represent the attack as a response to a YouTube video? Pulitzer-worthy reporting by my Daily Beast colleague Eli Lake has established that U.S. intelligence quickly ascertained that the Benghazi attack had been planned in advance; that it was organized by an al-Qaeda affiliate group operating inside Libya; that the attackers had surveilled the targeted consulate before the assault; that they maintained communications security in a way consistent with a trained force; and that they directed their firepower skillfully not only against the consulate, but also against a nearby CIA annex.

Yet despite this knowledge, and with very rare exceptions, the administration for almost two weeks mischaracterized the incident.

Here’s why. was fully Obama’s war. He made the decision to intervene to overthrow Muammar Gaddafi, and he decided on the nature of the intervention. Afterward, he took credit for the result: a dictator deposed, elections organized, without any long-term American presence in the country. Compared to or , looked at first like a cheap and easy success.

But events have shaken the Obama narrative about . Despite the elections, there is no effective government in . The eastern half of the country is controlled by armed militia groups imbued with al-Qaeda ideology — to the point where (The New York Times reported Friday) the presumed ringleader of the attack on the Benghazi consulate could hold a press conference on an open-air patio without fear of apprehension or retaliation.

Suddenly, does not look like such a big success. Gaddafi was nasty, but he had long ago ceased to be a nuisance for the . If overthrowing him created an al-Qaeda romper room a short boat ride from NATO ally — that would be a very bad and embarrassing result.

The sophisticated criticism of President Obama’s policy is this:

Obama intervened in despite his awareness that the anti-Gaddafi rebels had pro-al-Qaeda leanings. He intervened to support those rebels because he hoped to prove to Islamists everywhere in the Middle East and North Africa that they had more to gain from co-operating with the United States than from fighting the United States. This is the famous “opening to political Islam” that has been so intensely discussed in .

And the opening continues. It continues in the form of the covert aid now reportedly flowing to the Syrian rebels, and in the soft line being taken with ’s Muslim Brotherhood president even after Egyptian police failed to protect the embassy in against attack (which also was on 9/11). If the opening failed in , it’s likely to fail even worse in , where the rebel groups are even more saturated with Salafist Islam than the Libyan rebels.

Romney was trying to articulate these ideas on Tuesday night. He slipped and suffered for it. But his slip should not be allowed to shut down this discussion. President Obama’s big risky gambit is failing badly. Four Americans died because of that failure — and many other US interests have been put at risk. Americans need to hear that truth before they vote in November.
Posted by arclein at 12:00 AM