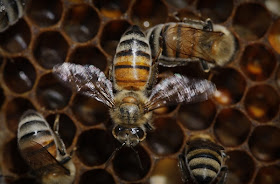 I have been covering this tale for four years and now there is more weighty science showing up to mobilize the mainstream media.  I am becoming more and more skeptical regarding the use of any form of chemical except as a last resort when our skills outright fail us.  I have fought with enough couch grass to appreciate Roundup.   I still want a protocol that sidesteps the actual need to use the chemical.

control is amenable to cropping cycles and the like as the organic crowd is teaching us.  The trend is now swinging toward those protocols and though it will still take years, I suspect that we are passing the peak in the at least.

In the meantime the suppliers are working a strategy of denial and simply ignoring complainants.  In the meantime, knowledgeable beekeepers now get assurances that the chemical has not been used close by before they arrive.

A newly published study draws a stronger link between mass die-offs of honeybees and an insecticide widely used on corn.

The study sheds more light on the worrisome phenomenon known as Colony Collapse Disorder. Bees play a critical role in the pollination of crops, and thus a threat to bee colonies can potentially affect entire ecosystems.

The latest study, conducted by Italian researchers at the and published in the journal Environmental Science and Technology, focuses on a class of pesticides known as neonicotinoids. The pesticides are popular because they kill insects by paralyzing nerves but are less toxic to other animals. Springtime die-offs of honeybees coincided with the introduction in in the late 1990s of neonicotinoids as coatings of the corn seeds, according to a report by UPI, citing researchers.

The scientists postulated that bees were flying through clouds of the insecticide created by automated planting machines that expel a burst of air with high concentrations of pesticide-coated particles, UPI said.

Even before the latest study, some researchers had identified neonicotinoids as a potential factor in bee die-offs, along with other pesticides, tracheal and Varroa mites, the Nosema fungus and a variety of viruses. Some European countries, including , have limited or suspended the use of neonicotinoids. The Environmental Protection Agency, however, continues to allow their use in the .

"To EPA's knowledge, none of the incidents that led to suspensions [in ] have been associated with Colony Collapse Disorder," the agency said in an advisory.