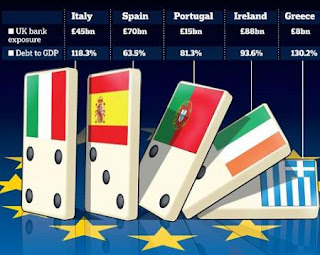 I have plenty of issues with USA macroeconomic policy, or more properly its lack thereof. This recession lasted four unnecessary years and the criminals who brought it on have not been charged with treason. That is beef enough I think.

The Europeans have done worse. None yet understands that macroeconomic policy must be distributed to be properly effective. The best way is to distribute those powers downstream to smaller political entities. This might well include the cities of Berlin, Frankfurt, Paris, Chicago, etc. In the USA, we best have the States themselves with a couple of obvious cities in the mix. Germany has active States and similar arrangements will work all over Europe. They, of course, centralized it instead.

Once we do this, both Europe and the USA will enter a growth driven economy operating at four to eight percent per year every year. Our problem is that no one in charge is slightly capable of either figuring this out or even making it happen. The economics profession is strangled for the lack of an effective theory of economics that properly informs us.

In the meantime, China has expanded at a real rate of several percent per year for thirty three years and no one can even explain why. At the same time, they have also absorbed serious economic wastage as a natural price to pay.

What is wrong with these people?

The U.S. and the Euro Crisis: Lessons From a Comparison

http://www.theepochtimes.com/n3/102271-the-u-s-and-the-euro-crisis-lessons-from-a-comparison/
The eurozone recession is now the longest on record for the single currency area, according to official statistics released last week, as the economy shrank again in the first quarter of this year. A comparison with the U.S. economy may shed some light on how such a profound economic failure can occur in high-income, highly educated countries in the 21st century.

While the U.S. economy is still weak and vulnerable, the record 12.1 percent unemployment in the eurozone is still a lot worse than our 7.5 percent here. The most victimized countries like Spain and Greece have unemployment of about 27 percent.

The contrast between the United States and Europe is all the more striking because Europe has much stronger labor unions, social democratic parties, and a more developed welfare state. Yet the eurozone has implemented policies far to the right of the U.S. government, causing needless suffering for millions more people. How does this happen?

The answers have little to do with a debt crisis but everything to do with macroeconomic policy, ideology, and—perhaps most importantly—democracy. As such these questions are relevant not only to the populations of both of these economic superpowers, but to most of the world.

Let’s start with democracy: most of the eurozone countries have little to no control over the most important policies that the government can use to increase employment and income, including monetary, exchange rate, and increasingly, fiscal policy. They have ceded this control to eurozone authorities—most importantly the European Central Bank (ECB). The decision makers for the more victimized countries—including Spain, Greece, Ireland, Portugal, and Italy—are now the Troika: the ECB, the European Commission, and the International Monetary Fund (IMF). They have their own agenda, and their priority is not restoring employment or even bringing about a speedy economic recovery.

Before returning to that agenda, let’s contrast the economic decision makers of the eurozone with those of the United States. Our central bank, the Federal Reserve, is officially independent of the government. Like the ECB, it has often acted against the interests of the majority, favoring powerful financial interests—most recently in its enabling of the $8 trillion housing bubble that caused the Great Recession. But the Fed is still accountable in some ways. Fed Chair Ben Bernanke has to report regularly to Congress, and the Fed has some fear that Congress might reduce its autonomy if it were to ignore the public interest too flagrantly. (They were not pleased about legislation approved by the U.S. House last year that required, for the first time, an audit of the Fed’s books; it remains blocked in the Senate.)

The ECB, by contrast, has no such constraints. In fact, for most of the last three years, the Troika has actually used the recurrent financial crises in the eurozone to pursue a political agenda: rolling back, as much as possible in a European context, the welfare state. The ECB could have avoided most and possibly all of these crises by simply stabilizing interest rates on Spanish and Italian government bonds.

But as was evident in numerous press reports, the ECB and its allies feared that to end the threat of a full-blown financial crisis would “remove the pressure” on governments to make the reforms that they wanted: cutting pensions and unemployment insurance, weakening unions’ collective bargaining rights (as in Spain), and shrinking government generally.

Finally in the fall of last year, ECB President Mario Draghi made some statements indicating that the ECB would stabilize Spanish and Italian bonds. He got tired of near-death experiences, apparently and after more than a dozen European governments (including Sarkozy’s in France) had fallen, the ECB and its allies were running up against some political limits.

This change in policy, which put an end to the most severe, recurring financial crises in Europe, can be partly attributed to the very slow impact of a severely limited form of democratic input. That included of course massive street protests and electoral events such as the surge of the Greek left party Syriza.

But this “democracy” is far too restricted and slow-moving to save the millions of unemployed whose lives are being wasted. Most importantly, it only ended the acute crises and not the continuing recession caused by the austerity measures enforced by the Troika. This has an important lesson for any country: don’t give away your economic sovereignty, on the most important macroeconomic policies that most of your nation’s livelihood depends upon—unless it is transferred to a set of institutions that you can really trust. Which of course is the opposite of what was created with the eurozone, with its built-in bias toward austerity in recession, and a central bank that was religiously committed to not caring about employment.

Again, the contrast with the United States is worth noting. Even if Mitt Romney had been elected, he would not have dared to implement the kind of austerity that would push the United States back into recession. He would want to get re-elected. That is not to say that eurozone officials have a monopoly on macroeconomic stupidity: the sequester in the United States is currently slowing the U.S. economy and causing unnecessary harm. But it was not as easy to get this result here, it is not as severe, and it will be easier to reverse than in Europe.

What then is the hope for Europe? Another political lesson, which most union leaders know, is that it’s difficult to win any concessions without bargaining power. So far, almost none of the political leaders in the most victimized countries, including Spain and Greece, are willing to simply refuse the Troika’s conditions, for fear that it would lead to their exit from the euro.

So the Troika doesn’t see much reason to let up on the austerity. In that sense the most promising recent development has been the meteoric rise of the populist Beppe Grillo and his Five Star Movement in Italy. He has been willing to talk about a referendum on leaving the euro, and his movement got the largest number of parliamentary seats of any single political party in the February Italian elections.

The case needs to be made, and explained to the public—as economist Paul Krugman recently did for Cyprus—that years of mass unemployment are too high a price to pay for keeping the euro. Politicians do not need to propose leaving the euro, as that remains taboo. But a refusal to accept recessionary conditions would shift the burden to the European authorities as to whether they want to kick any country out of the currency union.

Most likely they would not. But without a willingness to simply refuse the Troika’s recessionary conditions, it’s going to be a long, slow slog to reverse the continued infliction of needless suffering in what used to be one of the most democratic regions of the world.

Mark Weisbrot is co-director of the Center for Economic and Policy Research, in Washington, D.C. He is also president of Just Foreign Policy. Originally published in Al-Jazeera.


Europe is merely one step in the process of moving up the food chain. The lesser developed nations have already suffered the same economic exploitation by the WB and IMF that is now being felt by Europe. The next step will include the United States with the $16 trillion (fraudulent) debt to the same “financiers” behind the WB and IMF. Ref. http://www.scribd.com/doc/115919607/FUNDING-THE-NEW-WORLD-ORDER .

If Congress does not investigate the Fed and audit the Treasury accounts, the U.S. will go the way of Greece and Cyprus.