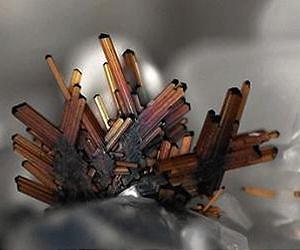 Yes rutile will survive and gather information.  It also happens to be the best mineral for titanium extraction which pretty well explains its ability to survive.

This sounds as if we are able to do far more with a scant sample than we ever imagined.

Thus rutile will serve a key application as a pathfinder to mineral deposits and their ancient formation.

A tiny grain helps reveal the history of a rock

"We can identify the rock from which the rutile originates, even if we only have a tiny grain of rutile," says researcher Thomas Zack, . Credit: Fred Kruijen

Rutile is used in ceramics and paints, but is particularly useful for finding out about the history of a rock. Where mineral deposits are found, rutile is often also present. The new methods therefore bring opportunities for strategies to find other mineral deposits, such as gold.

Until now, rutile has been a relatively unknown mineral, despite not being rare. For example, rutile can be found on most sandy beaches around the world, including in .

"It's incredible to see how little attention was paid to rutile until around five years ago," says geologist and researcher Thomas Zack, from the University of Gothenburg's Department of Earth Sciences, who has devoted much of his scientific career to studying the mineral.

Now, geologists can identify rock types containing rutile and follow the changes in temperature and pressure that they have been exposed to throughout its history, even if rutile is barely visible to the naked eye. Previously, researchers had to investigate considerably more rutile-bearing samples in order to carry out analyses.

"But now we can identify the rock from which the rutile originates, even if we only have a tiny grain of rutile," adds Thomas.

The new method is called "Laser Ablation ICP-MS", and produces results much faster than previous methods.

"In analytical terms, this is one of the most important analytical instruments at the Department of Earth Sciences here in Gothenburg," concludes Thomas Zack.