Self Driving Car System to Hit $100 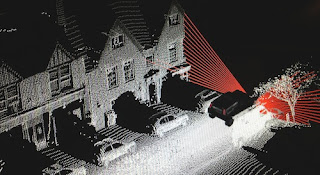 This is technology that can be delivered now while we wait for GPS linked systems able to go anywhere new. It is a huge advance on cruise control and takes advantage of fact that most of our driving is repetitive.

It can be implemented now on the same basis of cruise control in which the driver remains engaged. I would expect to seed it show up quickly from a first adopter who will drive competition to follow.

The customer really wants to get into his car and tell it to go to work or to the mall or home. This is doubly true for rush hour commutes.

It may take some time, but regulators will become comfortable enough to allow hands off work been conducted in the self driving car. It will also make rush hour hugely safer.

The Oxford University’s Mobile Robotics Group (MRG) RobotCar is a modified Nissan LEAF. Lasers and cameras are subtly mounted around the vehicle and taking up some of the boot space is a computer which performs all the calculations necessary to plan, control speed and avoid obstacles. Externally it's hard to tell this car apart from any other on the road. It is designed to take over driving while traveling on frequently used routes.

RobotCar constantly monitors the road ahead to look for pedestrians, cars or anything that could pose a danger. If an obstacle is detected the vehicle comes to a controlled stop and waits until the obstacle has moved out of the way. Once clear the car simply accelerates and continues its journey.

There are three computers onboard. The iPad, the LLC (Low Level Controller) and the MVC (Main Vehicle Computer). The iPad runs the user interface and demands constant attention from the LLC. If any of these computers disagree the driver will not be able to start autonomous driving. If at any point there is a problem when the car is in control the human driver is prompted to take control, if they fail to do so the car is automatically brought to a stop.

The sensors and computers build up a three-dimensional map of the route. This is augmented by semantic information such as the location and type of road markings, traffic signs, traffic lights and lane information, as well as aerial images. Since such things can change, the system can also access the internet for updates. Only when the system has enough data and has been trained enough will it offer to drive the car.


They have modified the base Nissan LEAF systems to allow complete fly-by-wire control. Everything from the steering to the indicators can be manipulated by the main vehicle computer in the boot. RobotCar senses the world in two main ways. The first uses a pair of stereo cameras to assess the road and navigate, much like a human driver's eyes. The second is a little different and uses several lasers mounted around the vehicle. These sensors assess the 3D structure of world and also improve performance at night.


The MRG team sees an immediate future in production cars modified for autonomous driving only part of the time on frequently driven routes. They estimate that the cost of the system can be brought down from its current £5,000 ($7700) to only £100 (US$155).

Already, robots carry goods around factories and manage our ports, but these are constrained, controlled and highly managed workspaces. Here, the navigation task is made simple by installing reflective beacons or guide wires. Our goal is to extend the reach of robot navigation to truly vast scales without the need for such expensive, awkward and inconvenient modification of the environment. It is about enabling machines to operate for, with and beside us in the multitude of spaces we inhabit, live and work.

Why Not Use GPS

Even when GPS is available, it does not offer the accuracy required for robots to make decisions about how and when to move safely. Even if it did, it would say nothing about what is around the robot, and that has a massive impact on autonomous decision-making.

We use the mathematics of probability and estimation to allow computers in robots to interpret data from sensors like cameras, radars and lasers, aerial photos and on-the-fly internet queries. We use machine learning techniques to build and calibrate mathematical models which can explain the robot's view of the world in terms of prior experience (training), prior knowledge (aerial images, road plans and semantics) and automatically generated web queries. We wish to produce technology which allows robots always to know precisely where they are and what is around them.

Perhaps the ultimate application is civilian transport systems. We are not condemned to a future of congestion and accidents. We will eventually have cars that can drive themselves, interacting safely with other road users and using roads efficiently, thus freeing up our precious time. But to do this the machines need life-long infrastructure-free navigation, and that is the focus of this work.

Although the car itself only moves in 2D, it senses in 3D. It only offers the driver autonomy if the 3D impression it forms as it moves matches that which it has stored in its memory. So before the car can operate, it must learn what its environment looks like. As an example, below is a video of the car learning/discovering what Woodstock town centre looks like.

We can use discrete stereo cameras to figure out the trajectory of the vehicle relative routes it has been driven on before. This movie shows the vehicle interpreting live images in the context of its memory of our test site at Begbroke Science Park. We can also use these cameras to detect the presence of obstacles - although vision is not great at night so we also use laser.

Tucked under the front and rear bumpers of the vehicle are two scanning lasers. These lasers allow us to sense the 3D structure of the cars environment - from this we can figure out the car’s location and orientation on the road.

Knowing what is where is pivotal for safe and robust operation. Here the car has knowledge of anything you as a driver might find useful - and more. The vehicle’s situational awareness is made up of static and dynamic environment features.

Dynamic information relates to potential obstacles which are either moving or stationary: cars, bicycles, pedestrians, etc. Knowing where they are - and where they are likely going to be in the near future - with respect to the planned vehicle trajectory is crucial for safe operation as well as for appropriate trajectory planning. Dynamic obstacles are detected and tracked using an off-the-shelf laser scanner. The system scans an 85 degree field of view ahead of the car 13 times a second to detect obstacles up to 50 metres ahead.

Static information consists of semantic information like the location and type of road markings and traffic signs, traffic lights, lane information, where curbs are, etc. This kind of information rarely changes and so a fairly accurate model can be built before the vehicle actually goes out. And it will last. Of course, you don’t really want to blindly believe such a prior map for all time - after all, things do change when conducting roadworks, for example - but knowing where you can expect to find certain things in the world is already incredibly helpful. The prior semantic map will get updated over time with information the vehicle actually gathers out there in the real world.