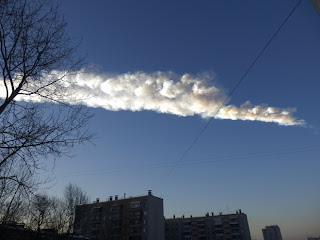 We are going to figure out just what is out there long before we get too serious about adjusting their orbits.  In fact that is effectively good enough because that should determine just what will strike.  We already know dangerous events are rare.  This last one, had we had warning would have been enough to avoid injury.

If you know everything out there and have a network in place to pick up new objects as they appear, you are already in pretty good shape.  Way more important, it becomes possible to identify true future threats.

If identified long in advance, disturbing the orbit is simple as long as we go far enough out toward the apogee of the orbit.  We likely have to wait for thousands of years for a real threat to bother us.

This week’s object could have been disturbed as it turned on the sun and eliminated.  It will not be too hard to map all objects much smaller before we are finished.  Thus in not too long it will be plausible to establish an international authority that is able to do just that.

Efforts to Protect Earth From Asteroids Are Under Way. But Will It Be Enough?

In the wake of Earth’s largest meteor strike in more than a century, the world’s attention has turned skyward.

The 17-meter bolide exploded in the air over the Chelyabinsk region of Russia on Feb. 15, shattering windows and injuring around 1,000 people. But had the meteor come in at a slightly different angle, the space rock could have impacted the ground and the fallout could have been much worse.

More money is already flowing toward future asteroid detection and mitigation strategies, but we may never be able to fully protect ourselves.

There are plenty of programs already in place for monitoring relatively large near-Earth objects, and more will be coming online soon, both from government space agencies and the private sector. However, even the best efforts will not be able to catch objects the size of the Chelyabinsk meteor — rocks that are small enough to evade detection by current technology until they are streaking through Earth’s atmosphere, but large enough to be dangerous.

The technology to actually stop any killer asteroids that we do manage to detect is also far in the future. Many techniques have been proposed, including using nuclear missiles, laser beams, or even spray paint, but none are proven or anywhere near becoming reality. A lot more research and development as well as an unprecedented international effort will be needed before we can even begin to be protected.
But we’re working on it.

Certain scientists and members of the spaceflight community have long and vocally advocated for better methods to track potentially dangerous objects and more funding for mitigation research. But the odds have always been small and attention to this potential natural disaster has mostly been on the back burner. The probability remains the same — Chelyabinsk-like events tend to occur between once every 10 years to once every century — yet now people’s attention has been refocused.

Simply looking for potentially hazardous asteroids is one of the most important parts of this effort, said physicist and former astronaut Ed Lu, who helped found the B612 Foundation, a private non-profit dedicated to spotting dangerous objects from space.

Asteroid orbits can be easily estimated once they’re spotted, potentially giving years or even decades of advanced warning to civilization. Astronomers already know of more than 400,000 asteroids, of which 6,500 pass near the Earth, but there are many gaps and uncharted objects that could still pose a danger.

“How stupid if we got hit because we weren’t looking?” said Lu. “That seems crazy to me.”

In 1992, a congressional study named the Spaceguard Survey Report recommended that NASA find 90 percent of all near-Earth asteroids more than 1 kilometer in size within 10 years, a goal mandated by Congress six years later. In 2005, the target was redefined to spotting 90 percent of objects 140 meters or larger. Perennially underfunded, the project last year received less than half of the money it needed to complete its task. But since the Chelyabinsk event, members of Congress from both parties havewritten statements and op-eds rallying greater support for these efforts.

Unfortunately, legislators are preoccupied with other issues for the time being. Budgetary squabbles may lead the country to gut a significant portion of national spending as part of the sequester, including NASA funding.

While no new money is likely to be coming to asteroid-spotting activities, the Russian strike may cause “a shift in priorities to looking at this more than we have at the past,” said space policy expert Henry Hertzfeld of .

Many ground-based telescopes are already actively watching the heavens, most coordinated through NASA’s Spaceguard program. These include the Catalina Sky Survey, the Spaceguard Centre, and the Japanese Spaceguard Association. A similar undertaking from the European Space Agency, the Space Situational Awareness program, works with amateur astronomers to monitor dangers from above, including near-Earth asteroids.

But the next and most important frontier is watching from space. By sheer coincidence, a Canadian Space Agency project that started in 2008 is scheduled to launch on Feb. 25. Named the Near-Earth Object Surveillance Satellite (NEOSSat), this suitcase-sized spacecraft will circle the planet every 100 minutes, scanning space for asteroids that may someday pass near the Earth.

Being in space means that NEOSSat will solve one of the main problems with current asteroid-watching techniques: You can’t do them during the day. A telescope aimed at the sky when the sun is up will see nothing other than bright sunlight. This is the reason the meteor went unnoticed — it came in from the dayside of our planet. The NEOSSat project will begin operation shortly after launch and look for some of the most dangerous objects larger than half a kilometer.

Even more robust space-based telescopes are now being readied by the private sector. Planetary Resources, Inc., a company that aims to mine asteroids, intends to launch a small telescope named the Arkyd-100 that will sit in low-Earth orbit and scan for nearby space rocks. Though its primary goal will be to find valuable asteroids, the spacecraft will be able to watch for possibly dangerous objects coming from the sunlit side of Earth. Arkyd-100 is expected to launch in 18 to 20 months.

A more targeted effort comes from the B612 Foundation, which plans to launch the Sentinel telescope in late 2016. This spacecraft would sit inside the orbit of Venus and constantly be on the lookout for killer asteroids, whichever direction they come from. Sentinel will spot nearly all asteroids 150 meters or larger and identify a significant portion of those down to 30 meters in diameter.

With a price tag of several hundreds of millions, the project is comparable to a large municipal undertaking like a new highway overpass. But it is still much more than anything accomplished by a private non-profit in space and so there has been some doubt whether or not B612 could wrangle enough people into backing their idea. Since , their telescope is on surer footing.
“There’s been a crush of people contacting us,” said Lu. “Suddenly it’s on everyone’s mind.”

Online donations have increased tenfold, he added. While most of these are fairly small, generally around $100, many richer potential donors who were sitting on the fence have now fully signed on to the company’s plans. Entrepreneur Peter Diamandis, co-founder of Planetary Resources, reported a similar effect with investors who were previously hesitant but are now more willing to back in their venture.

Should one of these telescope projects one day spot a doomsday asteroid, there are already many proposals for how to deflect the object. The method most favored by the B612 Foundation is fairly simple – place a modest-size spaceship near the asteroid and have its gravitational pull slowly alter the object’s course, averting catastrophe. The technique is relatively low cost and would certainly work but would require several years or possibly decades of advanced notice.

For a large rock that’s headed right for us fairly quickly, B612 recommends smashing a giant projectile into the asteroid. This kinetic impactor would provide a strong kick to shuffle an asteroid off its current trajectory. Later, a gravity tractor could be used to make any more precise changes necessary.

It is still unknown exactly what the worldwide reaction will be to a known dangerous asteroid. Actual physical research into asteroid mitigation techniques has been pretty much nonexistent.

Most likely, asteroid mitigation efforts will be an international undertaking. Any particular city or country has only a small chance of being hit, though the countries with some of the largest land area, the and , are also those with the most advanced space programs. It would be in everyone’s best interest to ward off the attack, perhaps providing something akin to a common enemy, suggested Hertzfeld.
Posted by arclein at 12:00 AM