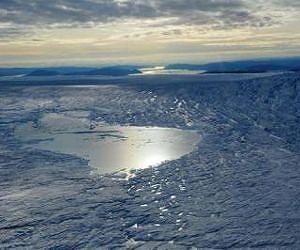 What I find most interesting was how a really modest increase in climate was able to feed back into ice shelf mobility. The additional warmth produced larger surface melting on the ice sheets and this melt water increases penetration to the bottom of the ice sheet affecting its effective viscosity. It is clearly quick and effective.

It is also a warning that a sudden sharp temperature rise of say two degrees or more will dump huge amounts of ice into the ocean very quickly. This is likely to happen as we pass through the Sirius cluster in the next fifty thousand years or so.

Another question I would like to have answered is just how much surface ice loss occurred last summer. Was it enough to make the year's ice signature disappear from the ice core record? It clearly has not happened often but it may be a significant source of error when it does happen.

Let us not forget that the Greenland ice sheet is a remnant of an ice sheet comparable to the Antarctic sheet. Thus modest changes will have far larger effects to the whole sheet making it harder to correct for by changing locations.


Just as ice sheets slide slowly and steadily into the ocean, researchers are returning from each trip to the Arctic and Antarctic with more data about climate change, including information that will help improve current models on how climate change will affect life on the earth, according to a Penn State geologist.

Alley, who reported on his research Feb. 16 at the annual meeting of the American Association for the Advancement of Science in Boston, has studied the movement of ice sheets in Greenland and the Antarctic over the years. One way researchers are measuring climate change is by collecting data on how fast ice sheets are flowing toward the sea and comparing those speeds over time, according to Alley.

Ice sheets are miles-thick, continent-wide layers of ice that spread toward the oceans. The researcher said that rising air temperature speeds melting in warmer parts of ice sheets, contributing to sea-level rise. Ocean warming can melt the floating ice shelves that form in bays and fjords around ice sheets.

This lowers the friction with the rocky coast, allowing non-floating ice to flow more rapidly into the ocean and raise the sea level, Alley said.

However, when the climate is warmer, water levels build up beneath the ice and allow it to float higher above the rocks, cutting down on the friction. Researchers have reported that the speed of the ice shelf movement has nearly doubled in recent years.

Rapid ice-shelf melting also leads to sea level rises, Alley said. The more quickly the ice can enter the sea, causing sea levels to rise. The areas of uncertainty are how much the sea levels will rise and how soon it will happen, the researcher said.

Currently, scientists have projected a range of probabilities about how high and how quickly the seas will rise, Alley said. Now, they are trying to better understand whether sea level rise will happen gradually, like a dial, or abruptly, like a switch, he said. "If you turn a dial, such as a dimmer on an overhead light, you can change the brightness gradually, but with a switch, it is either on or off," said Alley.

Most planners expect the sea level to rise gradually. If sea levels do change minimally and slowly, there will still be costs, but people and governments will have more time to deal with the problems -- for instance, by building walls and replenishing beaches with sand.

However, if sea levels rise fast and suddenly, the cost to fix the damage and prepare for further problems will increase rapidly, according to Alley.

"If the sea rises faster, then it can be much more expensive," said Alley. "The prices will go up much faster than the sea levels." Alley expects future research projects will help scientists better predict the rate and size of sea level rise.

"The great thing is that this is a wonderful period of discovery and exploration in places like Greenland and the Antarctic," said Alley. "In the next few year we'll see even more progress."