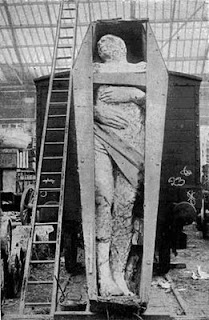 This item has an alternative explanation for Bigfoot genesis that I do not support.  I expect that Bigfoot is totally independent from the Irish Giants who can be mapped coincidentally with the European Bronze Age in the .  Bigfoot appears likely to have arrived with the later pulse of human settlement that came out of the overland as the Ice collapsed.

Both source human and Wildman populations were available on the Asian side and seamanship was unnecessary.  The first pulse of humanity came by sea from both East and West in skin craft around 20,000 years ago.

Thus the dates provided by Ketchum are highly appropriate for the time of entry.  Cooperation between the two species would be highly plausible and that would open the possibility of actual mating.  Actual passage through the early breaks in the ice may have demanded great cooperation.

After a five year project studying the DNA obtained from 100 samples which may have come from Bigfoot, veterinarian Melba S. Ketchum believes that she has found evidence which suggests that the mythical cryptid exists.


At team of researchers at DNA Diagnostics in Nacogdoches, Texas, under Ketchum's direction, believes that Bigfoot may be a human relative which developed over 15,000 years ago as a hybrid between humans and an unknown primate, states a story published by the Huffington Post on November 30.


Ketchum's research suggests that Bigfoot is descended from the impregnation of a female human by an unidentified primate.  The team claims to have discovered three nuclear genomes belonging to the creature known as Sasquatch or Bigfoot.  The research team was comprised of experts in the fields of genetics, forensics, pathology, and other related disciplines.

While this is encouraging news for Bigfoot believers, Ketchum's study raises many questions.  Under what circumstances would a primate impregnate a human female?  Was this hybrid the result of a chance encounter, or a planned "experiment"?


Journal of the Bizarre's own Marlin Bressi believes that he knows the answer.  In his forthcoming e-book, In Pursuit of Horned Giants, the author chronicles his investigation into the "Horned Giants of Pennsylvania"- skeletons of humans who stood over 7 feet tall which were found along the Susquehanna River in the town of in the 1880s.


Bressi believes that there is a link between the Susquehannock tribe and Sasquatch- a link, claimed in his book, that goes back 15,000 years- and extends across the .

According to his book, the author believes that Bigfoot migrated to during Neolithic times, and was the ancestor to a mysterious ancient tribe of giants known as the Andaste, who eventually became the now-extinct Susquehannocks. "Several historical documents refer to the Susquehannocks as being giants," explains the author.  "In Captain John Smith's journal, written 1607, Smith describes the Susquehannocks as being a tribe of giants.  Missionary David Brainerd also did so in 1754, and so did explorer La Rochefoucald-Liancourt in 1795."


The author states that Susquehannock war shields may have also payed homage to their ape-like ancestors.  "There have been Susquehannock war-shields found which have been decorated with depictions of ape-like creatures," explains Bressi.  "Since monkeys aren't indigenous to , this is astoundingly peculiar."


The Susquehannocks were a mysterious tribe, having gone extinct in the 18th century, but Bressi believes that Native American language may hold clues to solving the mystery of Bigfoot.  "The word sasquatch is derived from sesquac, or "wild man" in the Salish tongue of the Pacific Northwest and .  The Salish family consists of twenty-three languages, and ethnologists believe that there is no relationship between these and any other Native American languages," he states.  "My theory is that the word sasquatch is derived from Sasquesahanough, which is the name the Powhatan gave to the Andaste, who later became known as the Susquehannock.  Sasquesahanough translates into 'muddy water people'.  Since many modern-day Bigfoot sightings are often paired with a strong offensive odor, not unlike that of a muddy dog, it could be possible that the Powhatans used the word sasquesahanough as an insult to the strange foul-smelling tribe of hairy giants from ."


So how did the word Sasquatch enter the vocabulary?  In his book, Bressi states that the word wasn't even coined until the 1920s, when it was used by a Canadian newspaper reporter named J.W. Burns.  "Burns is the first person to use the word sasquatch in print," he says.  "My guess is that when the French explorer Etienne Brule explored Pennsylvania in 1605, he encountered the Sasquesahanough and brought the word back to Canada in the 17th century, where it was later adopted by the Salish, who used it to refer to Bigfoot in the Pacific Northwest.  Since the Salish language developed independently from other native languages, the word had to have been introduced to them by someone else."


Pennsylvania has a rich history of Bigfoot sightings, dating back hundreds of years. "Historically, has had more Bigfoot sightings than any other state, dating back to Revolutionary War times," writes Bressi.  "The first recorded West Coast sighting didn't take place until 1924 when a prospector, Albert Ostman, claimed to have been abducted and held captive by Sasquatch for six days in ."[ not quite true - arclein]


Ohio, another state with historically high numbers of Bigfoot sightings, also plays a prominent role in In Pursuit of Horned Giants.  In 1800, an early settler of named Aaron Wright discovered gigantic human bones inside a Native American burial mound.  Since that time, several similar archaeological discoveries have been made in the area.  "Incredibly, the areas where giant human bones have been found in burial mounds correspond to areas with high numbers of Bigfoot sightings," the author claims.  "I believe the reason why we don't find Bigfoot carcasses is because, like many ancient mound-building tribes, Bigfoot has developed complex burial rituals."  He adds: "To assume that Bigfoot is intelligent enough to elude throngs of zealous researchers, but not intelligent enough to bury its own dead is laughably absurd."

The author believes that the Bigfoot of the Pacific Northwest migrated from the East Coast, after arriving from the British Isles via an ice bridge:  "An ancient race of giants arrived in during a period of time known as the Late Glacial Maximum, which occurred between 10,000 and 13,000 years ago.  This period of glaciation is what allowed Asians to cross the Bering Strait, thereby populating .  However, this same period of glaciation may have allowed Neolithic Bigfoot to travel from Ireland and Scotland to the Orkney Islands, then onto the Shetland Islands, Iceland, Greenland, and then to North America's Baffin Island.  If Melba Ketchum's research is correct," states Bressi, "then Bigfoot first appeared in Europe at least two thousand years before arriving in ."

Not surprisingly, In Pursuit of Horned Giants implies that the continue to have an abnormally high rate of gigantism- a genetic abnormality which may have been left behind by the migrating Bigfoot:


"In 2010, the board of directors of the gave researchers permission to examine the teeth from an 18th-century Irish giant named Charles Byrne.  Using the DNA from Byrne's teeth, a germline mutation was identified in the gene known as the aryl hydrocarbon–interacting protein gene, or AIP.  It was discovered that members of  four modern-day Irish families had the same mutation as the 18th-century giant, therefore proving that modern giants of shared a common ancestor who lived 57 to 66 generations earlier.  This proves that gigantism can be hereditary, which means that a race of ancient giants could have existed in the ."  [ this is confirmed in other ways and it is my conjecture that these peoples came during Atlantean times - arclein]