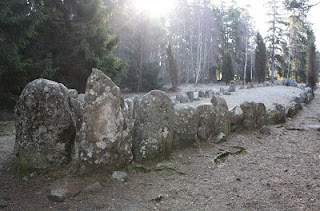 Let it be said, that the textual evidence supporting the Baltic as the true venue of the books of Homer is convincing and I am convinced. Add in the contemporaneous high civilization of
Atlantis crowding things in the Mediterranean and you have compelling negative evidence. It is equivalent to the Iroquois writing their eighteenth century history without mention of New France and New England. It can not be done.

More precisely, the Iliad is dated using astronomical methods to 1180 BC or twenty years prior to the final demise of the Atlantean world in 1159BC. And yes Virginia, we have those dates dead on plus or minus a couple of years at best. Thus Homer's world was outside the ambit of Atlantis which was impossible in Greece but plausible in the Baltic. The writer Da Vinci lays out the textual evidence for a Baltic venue.

What was missing was archeological confirmation of a nascent Bronze Age culture and ship building technology circa 1100 BC. This item remedies that problem.

At this time the Baltic was an unimportant sideshow to Atlantean trade that passed through Lewis and Cornwall.

In the middle of the Bronze Age, around 1000 BC, the amount of metal objects increased dramatically in the Baltic Sea region. Around the same time, a new type of stone monument, arranged in the form of ships, started to appear along the coasts. New research from the University of Gothenburg, Sweden shows that the stone ships were built by maritime groups.

The maritime groups were part of a network that extended across large parts of northern Europe. The network was maintained largely because of the strong dependence on bronze.[ again this was the coinage of the times – arclein ]


Archaeologists have long assumed that bronze was imported to Scandinavia from the south, and recent analyses have been able to confirm this notion. The distribution of bronze objects has been discussed frequently, with most analyses focusing on the links in the networks. The people behind the networks, however, are only rarely addressed, not to mention their meeting places.


‘One reason why the meeting places of the Bronze Age are not discussed very often is that we haven’t been able to find them. This is in strong contrast to the trading places of the Viking Age, which have been easy to locate as they left behind such rich archaeological material,’ says the author of the thesis Joakim Wehlin from the University of Gothenburg and Gotland University.


In his thesis, Wehlin has analysed the archaeological material from the Bronze Age stone ships and their placement in the landscape. The stone ships can be found across the entire Baltic Sea region and especially on the larger islands, with a significant cluster on the Swedish island of Gotland. The ships have long been thought to have served as graves for one or several individuals, and have for this reason often been viewed as death ships intended to take the deceased to the afterlife.


‘My study shows a different picture. It seems like the whole body was typically not buried in the ship, and some stone ships don’t even have graves in them. Instead, they sometimes show remains of other types of activities. So with the absence of the dead, the traces of the survivors tend to appear.’


One of Wehlin’s conclusions is that the stone ships and the activities that took place there point to people who were strongly focused on maritime practice. Details in the ships indicate that they were built to represent real ships. Wehlin says that the stone ships give clues about the ship-building techniques of the time and therefore about the ships that sailed on the Baltic Sea during the Bronze Age.

By studying the landscape, Wehlin has managed to locate a number of meeting places, or early ports.


‘These consist of areas that resemble hill forts and are located near easily accessible points in the landscape – that is, near well-known waterways leading inland. While these areas have previously been thought to be much younger, recent age determinations have dated them to the Bronze Age.’[ again this is classic Bronze Age palace trade factories relating more to the sea that to a sparse hinterland - arclein]


The thesis offers a very extensive account of the stone ships. It also suggests that the importance of the Baltic Sea during the Scandinavian Bronze Age, not least as a waterway, has been underestimated in previous research. /
Posted by arclein at 12:00 AM