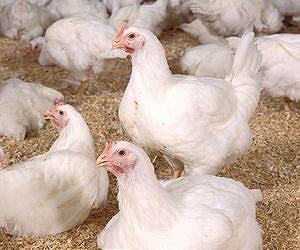 This could even be rigged up quite cheaply with a heater and a blower. It certainly applies to all animal handling situations and looks to be a simple add on to a wash down. At least it promises to be cheap to accomplish and manpower would be on hand anyway attending to other tasks.

At least we know that it is effective enough.

It is also a handy tip for the individual pet owner who can apply a hair dryer to pet bedding and devices and make it better.

Forced hot air can break the cycle of bacterial cross-contamination in poultry, according to new ARS research. Photo by Stephen Ausmus.

Poultry producers can reduce bacterial cross-contamination in poultry cages by treating the cages with forced air that's been heated to 122 degrees Fahrenheit, according to a study by U.S. Department of Agriculture (USDA) scientists.

While being transported in coops on trucks, poultry that have bacteria such as Campylobacter can contaminate, through their feces, other poultry that are free of pathogens. Those disease-causing bacteria can then be passed on to the next group of birds during the next trip, and so forth, unless the cycle is broken.

Campylobacter is a food-borne pathogen that can be present in raw or undercooked poultry. Since the bacteria are commonly found in the digestive tracts of poultry, they're readily deposited onto coops and trucks when contaminated animals are transported to processing plants.

In the study, Agricultural Research Service (ARS) microbiologists Mark Berrang and Richard Meinersmann collaborated with researcher Charles Hofacre of the University of Georgia at Athens. Berrang and Meinersmann work in the ARS Bacterial Epidemiology and Antimicrobial Resistance Research Unit in Athens. ARS is USDA's principal intramural scientific research agency, and this research supports the USDA priority of promoting food safety.

The researchers tested the use of hot flowing air to speed the process of drying soiled or washed cages to lower or eliminate detectable Campylobacter on cage flooring.

When the hot flowing air was applied to fecally soiled transport cage flooring samples for 15 minutes after a water-spray wash treatment, Campylobacter levels declined to an undetectable level. Static heat at similar temperatures was not nearly as effective, and unheated flowing air was moderately effective, but less so than hot flowing air.