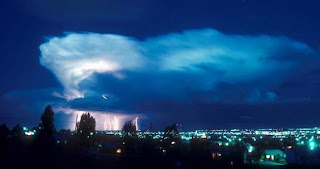 While we cannot see them easily, and obviously find them difficult to sample, the atmosphere is well endowed with its load of single cell life. We likely completely underestimate it connectivity besides.

Recall that we have conjectured the existence of methane filled bubbles made by slime molds able to rise into the stratosphere as plausible sources of certain types of lights in the sky. We have no difficulty positing a happy slime mold in a pond of water. How about all sorts of critters in the pond of oxygen rich atmosphere?

The persistence of a significant bacterial background throughout the atmosphere actually makes that scenario compelling.

We obviously need to develop technology able to image the deep atmosphere and to spend way more time in high flying balloons with special filters over out eyes.


The storm clouds in Earth's atmosphere are filled with microbial life, according to a new study.

The research, published today (Jan. 23) in the journal PLoS One, revealed that hailstonesdrawn from storm clouds harbor several species of bacteria that tend to reside on plants, as well as thousands of organic compounds normally found in soil. Some of the bacterial species can seed the tiny ice crystals that lead to rain, suggesting they play a role in causing rain.

"Those storm clouds are quite violent phenomena," said study co-author Tina Santl Temkiv, an environmental chemist at Aarhus University in Denmark. "They are sucking huge amounts of air from under the clouds, and that's how the bacteria probably got into the cloud."

Living on a cloud

In the past, researchers have found bacterial life in clouds that drift over mountaintops. Bacteria have been found as far up as 24.8 miles (40 kilometers) and may even survive as spores into space, Temkiv said.

Temkiv and her colleagues wanted to see if bacteria lived in the violent storm clouds that hover above the Earth's surface. To find out, they studied 42 hailstones that had formed in a thunderstorm over Ljubljana, Slovenia, in May 2009.

After carefully removing the outer layer and sterilizing the hailstone, they analyzed its chemical composition.

The team found thousands of organic, or carbon-containing, compounds — nearly as many as found in a typical river, Temkiv said. In addition, they found several species of bacteria that normally live on plants. Some of the bacteria make a pinkish pigment that allows them to withstand the punishing ultraviolet rays in the atmosphere.

Some of bacteria found are ice-nucleators, meaning they can act as seeds for ice crystals to attach to in the clouds above Earth. When these same ice crystals get large enough, they fall as rain or snow, depending on the air temperature.

The findings suggest that bacteria could influence weather patterns, possibly making rain, Temkiv said.
"They may be growing in clouds, increasing in number and then modifying the chemistry in the cloud but also in the atmosphere indirectly," she told LiveScience.

The researchers think the bacteria come from the air hovering just above Earth that gets swept into the storm clouds through updrafts. That would suggest the atmosphere is a thread that can connect distant ecosystems, and that certain bacteria may be better at colonizing faraway environments, Pierre Amato, a researcher at France's Blaise Pascal University who was not involved in the study, wrote in an email.
"Clouds can be thought of as transient ecosystems selecting for certain [types of bacteria] that are better fitted than others, and that can thus quickly disperse over the globe," Amato said. "Understanding how microbes disperse is relevant, of course, for epidemiology, and also for microbial ecology."