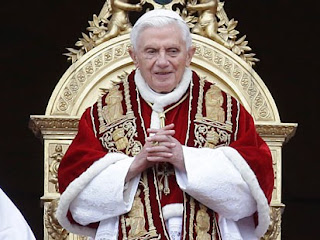 He tackled the problems of the church and did it as well as can be expected and did not avoid the difficult issues.  I do not know that any man could do better.  The church itself can go forward cleansed and under a new pope, reinvigorated in its primary mission.

There are always voices pulling the church into the secular world in its many manifestations.   That has never been its mission but just as you and I, it must interact.  Let it be.

Humanity is everywhere absorbing the Christian idiom and under Benedict’s predecessor, the church regained its primacy.   Today, most of humanity are cultural Christians even when it is not understood.  For that alone, the prophecies of end times are been met.

Yes it is time for Popes to step aside as age overcomes them and human energy is demanded for global leadership which is now firmly global..

1) Religion for Pope Benedict XVI is as much a public issue as it is a private one. In 2008, he warned American bishops against “the subtle influence of secularism,” holding that “any tendency to treat religion as a private matter must be resisted.”

2) The pope made it clear that religious freedom was not only a God-given right, it was “the path to peace.”

3) He knew religion could be abused, leading even to violence. His much misunderstood 2006 Regensburg University lecture was really about the uncoupling of religion from reason (reason not united to faith also leads to violence).

4) The pope reached out to dissidents on the right and the left, seeking to bring them to communion. Not all his efforts succeeded, but his attempts were noble.

No one did more to successfully address the problem of priestly sexual abuse than Joseph Ratzinger. Just weeks before he was chosen to be the new pope, he spoke bluntly about this issue: “How much filth there is in the Church, and even among those who, in the priesthood, ought to belong entirely to Him!”

5) Addressing those who still blame Jews for the death of Christ, the pope settled the issue with authority by pointing out that no one should be blamed since, as he argued, the crucifixion was necessary for God’s plan of universal redemption.

6) The pope’s many references to what he called “the dictatorship of relativism” were a constant reminder that one of the greatest threats to freedom today is the abandonment of the search for truth.

7) Pope Benedict XVI’s willingness to step aside comes as a surprise this Monday morning. What is not surprising is his humility. Indeed, it is one of his most defining characteristics, one that separates him from today’s ego-centric public figures.