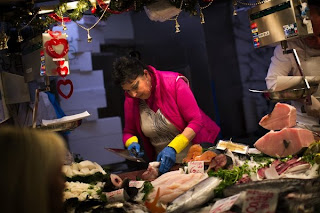 It turns out to be a total rout. It appears that the right oils are even beneficial. The point is that a thirty percent differential is huge and the study was large and well designed. It was halted at the five year mark because it became unethical to continue.

I think we all know how to cook this way. It is simply a matter of no longer buying red meat products and ramping up the fish component.

We really do not have good completely trusted explanations for why this is all true, but that is surely irrelevant as even good explanations often lead to incorrect conclusions. What we do know is that ample vegetables and fish will go a long way to protecting against heart disease.

The take home is that this study was decisive. Henceforth, all medical advice will adhere closely to the Mediterranean diet protocol.

In a head-to-head contest, a Mediterranean diet, even drenched in olive oil and studded with nuts, beat a low-fat diet, hands-down, in preventing stroke and heart attack in healthy older subjects at high risk of developing cardiovascular disease.

The latest smack-down in the diet wars appears to deal a knock-out blow to the notion that high-fat olive oil and tree nuts — walnuts, almonds and hazelnuts — are a no-no for those wishing to improve their health. On the contrary, Spanish researchers concluded that the consumption of extra-virgin olive oil and nuts "were probably responsible for most of the observed benefits" attained by those in the two groups following a Mediterranean diet.

The study's findings, released Monday by the New England Journal of Medicine, also add to mounting evidence contradicting a long-held tenet of dieting to improve health: that all calories are equal.

The benefits of the Mediterranean diet were pretty substantial too: compared with a group of 2,450 subjects who were urged to follow a low-fat diet, the 4,997 who followed a Mediterranean diet supplemented either with nuts (2,454 subjects) or with extra-virgin olive oil (2,543 subjects) were 30% less likely to suffer one of the following outcomes: a heart attack, stroke or death attributed to cardiovascular disease.

The Mediterranean dieters were almost 40% less likely than the low-fat dieters to have a stroke during the follow-up period. And the superiority of the Mediterranean diet over a low-fat diet was consistent across virtually all sub-categories of participants -- men, women, older and younger subjects, and those with or without every risk factor for cardiovascular disease. Only among the small group of subjects without hypertension did a low-fat diet show better results.

All of the trial's subjects were ages 55 to 80 (women were 60 to 80) and either had type 2 diabetes or satisfied at least three of the following criteria: they were active smokers, were overweight or obese, had a family history of premature heart disease or had hypertension or worrisome cholesterol readings. After randomizing the subjects to the low-fat diet group, the Mediterranean diet with tree nuts group or the Mediterranean diet with olive oil group, researchers followed the subjects for a median of 4.8 years to ensure they were adhering to their recommended regimen and to gauge how many in each group suffered a heart attack or stroke or died of cardiovascular disease.

Many studies have suggested the Mediterranean diet -- which is rich in fatty fish, fruits, vegetables and fatty acids -- trumps other diets meant to induce weight loss when the measure of success is heart health. But the current trial is the first to meet the "gold standard" of biomedical research, in which large numbers of patients are randomly assigned to distinct groups, followed for several years and compared on the basis of predetermined outcomes.

The study's findings "blow the low-fat diet myth out of the water," said Cleveland Clinic cardiologist Steven Nissen, who was not involved in the current research. Nissen, an expert on the effects of drugs and nutrition on cardiovascular risk, called the study "spectacular" and touted the findings as impressive.

Almost entirely missing from the Mediterranean dieters' daily intake was red meat and meat products. Those subjects were urged to keep to a minimum sodas and fats that are in partially solid form and to limit consumption of commercially baked sweets and pastries to no more than three times a week. They were given a weekly supply of either almonds, walnuts or hazelnuts and told to eat about a quarter-cup a day of one of them. Or they were supplied a liter of extra-virgin olive oil each week and instructed to consume at least 4 tablespoons a day.

At the same time, Mediterranean dieters were told they should feel free to drink wine moderately — about seven glasses per week.

Aside from those guidelines, subjects in the Mediterranean diet arms of the trial had an "energy unrestricted" diet: They did not have a calorie limit.

Low-fat dieters were told to avoid nuts and vegetable oils of all kinds (including olive oil), to limit their store-bought sweets to fewer than one per week and to remove visible fat from all meats. In addition to fruits and vegetables, they were encouraged to eat three servings of low-fat dairy product and three or fewer servings of bread, potatoes, pasta or rice each day.

But since the study was conducted in several centers in Spain, even the low-fat dieters tended to eat lots of fruits, vegtables and leaner meats. The researchers found that, while eating slightly more legumes and fish, the Mediterranean dieters largely differed from the low-fat dieters in their nut-and-olive-oil consumption.

While their suspicions fell on nuts and olive oil, the researchers were wary of ruling out the contribution of other elements of the Mediterranean diet to improved cardiovascular health.

"Perhaps there is a synergy among the nutrient-rich foods included in the Mediterranean diet that fosters favorable changes" in the physiological responses, such as inflammation and insulin insensitivity, that give rise to cardiovascular disease, the researchers wrote.