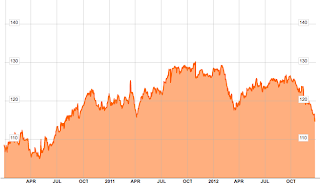 It is not exactly a collapse of course, but it is certainly a readjustment that properly reflects the collateral position Japan occupies with China and the USA. It is still noteworthy and suggests a strong burst in Japanese growth is now pending. At the same time it is defensive and markets out uncertainty regarding both China's and the USA's financial posture.

In the meantime, Japan is liquidating the tsunami damage in good order although it will require several more years for that to be finished.

Rumors of war are more to do with internal infighting in China than anything else.

Earlier we joked that lost in all of the Fiscal Cliff shuffle was the fact that the yen has been getting clobbered.


Indeed this is really the huge story in global markets right now. In addition to being a major shift in one of the world's biggest and strongest currencies, it affects all sorts of manufacturers who do business in yen, or compete with companies that do business in yen.

Here's a three-year chart of the CurrencyShares Japanese Yen Trust, an ETF that's designed to track the yen. As you can see, it's been collapsing, and is now at a level that hasn't been seen in over two years.

There's actually no one thing.

But a few of them are:

of Japan into ultra-easy monetary policy, and he's even favored bond purchases for the direct purpose of funding stimulus money.

-- The US economy is strengthening. This isn't about the yen, but it does help boost what the yen is being compared to, the dollar. A strengthening economy helps contribute to rising US interest rates

, which will help the US dollar.

-- There's a belief that the endgame is in sight for the Fed to start ending its ultra-easy monetary policy. Things aren't going to change overnight, but at the current pace of economic improvement, the Fed's goals could be hit in late 2014, which is earlier than the previous 2015 tightening guidance. A tighter US monetary policy would benefit the dollar against the yen.

-- Fear of war? Also thanks to Japan's new PM Shinzo Abe, the country is likely to adopt an even more aggressive, militaristic stance towards China. One professor in Australia predicts war. As Matt Yglesias notes, any war (or war preparations) would likely be funded by aggressive money creation. More yen weakening.

-- Japan's economy is bad. In addition to all that, the economic data in Japan is deteriorating again, creating more reason for the Bank of Japan to do new measures.

One interesting trend is that a lot of these developments are fairly new. So there's a confluence of a lot of stuff happening right now.

One is that this isn't necessarily a bad thing at all. A weaker yen is itself a form of stimulus, and should help the country's domestic manufacturers. Nomura recently upgraded the Japanese automakers specifically on this, and in general the Nikkei has been on a total tear.

The other is that none of the above have anything to do with the typical Japan bear arguments about massive national debt and bond collapse. Those things that people freak out about don't have much to do with things.

http://www.businessinsider.com/why-the-yen-has-been-getting-crushed-2012-12#ixzz2GNTvwDH0
Posted by arclein at 12:00 AM