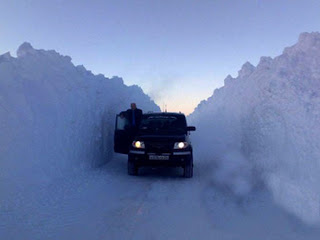 This is an example of how bad the snow can get, yet it is still a rare occurrence. The real take home is that the potential is there always and it cannot be easily predicted, just as hurricane Sandy was an example of a rare confluence of events that just happened to produce a mega storm.

Yet capability needs to be in place should such an event arise. Again it is distributed capability that can move on target when needed. It is no trick to pretrain crews for mobile operations operating 24/7 in an emergency mode with remaining crew doing double shifts back at home. The need for the planning is now clear and I suspect that it is now well established also.

Russia's crews are now been stress tested and will learn. This is as bad as it gets and one needs to known what is important to keep open. Otherwise, everyone is taking a week off whether they like it or not.


Unrelenting snowfalls have caused unprecedented chaos in Russia. Over the past week, the country has seen scores of traffic accidents, flight delays and, in some cases, the complete isolation of some remote settlements and towns.

On Friday, Moscow was on a verge of traffic collapse as more than 10 inches of snow fell on the city, which is more than half of January’s average.

Thousands of passengers were stranded overnight in the capital’s major airports, as several dozen flights were delayed.

Muscovites woke up and found their cars, driveways and houses buried under a thick layer of snow, with city workers unable to get to smaller streets.

Falling snow and ice caused many accidents due to poor visibility and bad road conditions. Moscow witnessed a 13-kilometer jam on MKAD, one of the city's main highways, reducing speeds to 10 to 25 kph in the capital.

More than 12,000 snow removal trucks worked around-the-clock to clean up the mess, but their efforts did little, with the city coming to an effective standstill.

The chair of the Duma’s transport committee called for local transport officials to face legal sanctions for failing to cope with the winter weather. “Until local bureaucrats face the wrath of the law, winter will always be a surprise occurrence. They will continue to do nothing, as people suffer,” Mikhail Bryachak told Kommersant FM radio.

However, meteorologists have promised some good news for Moscow: The stormy conditions are expected to recede over the weekend.

While the snowstorms have caused inconvenience for large population centers in western Russia, they have been life-threatening further east in the country. The polar circle city of Norilsk has been buried under 10 feet of snow – entire apartment blocks, markets, stores and offices were buried under snow overnight.

Banks of snow were as high as two people put together, reaching the second-story windows of some apartment buildings. Cars, stores, garages were blocked. Norilsk metropolitan workers were forced to dig passageways through the snow banks to create access between the outside world and the barricaded city.

Meanwhile, icicles up to three feet in length have formed off the ledges of buildings, breaking at random and causing a lethal hazard for pedestrians below.

Elsewhere, the extreme weather continues. In the Altai Republic in Western Siberia, 12 Russian settlements were isolated because of the snowstorm. Seven settlements, with a total population of 1,300 people, remain cut off from the outside world due to the snow drifts. Emergency crews are currently en route to deliver needed supplies to the stranded populations.

Snow accompanied by strong winds has caused flight delays in the airport of Russia’s far eastern town of Petropavlovsk-Kamchatsky. The runway has been cleared, but planes are not risking takeoff due to strong sidewinds. Flights were also delayed in Russia’s easternmost cities of Vladivostok and Khabarovsk.

More snow storms are predicted in Western Siberia and the Western Urals over the weekend.

In the end of 2012, Russia saw extreme winter not witnessed since 1938. The coldest-ever December in Russia led to the evacuation of hundreds of people in Siberia, where temperatures fell below -50 degrees Celsius; Moscow also saw its coldest night ever for the season.

More than 90 Russians died during the cold snap, and more than 600 people were taken to hospital due to the extremely dangerous weather, which is 10 degrees below the December norm.

Nearly 200 people have died throughout Russia as a direct result of weather-related accidents and hypothermia this season, according to official statistics, although the extreme conditions have likely contributed to many more fatalities.