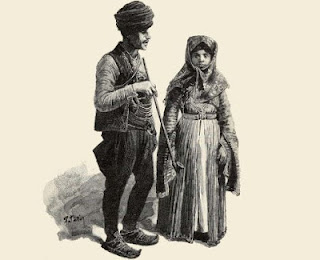 What makes this problem interesting is that the population was both dispersed but mobile and this allowed any single unit to avoid outright absorption and assimilation.  Intermarriage took place often enough but it was a single individual every few years and they would always move on severing any local ties.  Thus the population remained internally more homogenous than would be expected.

They also arrived in Europe at much the same time as the Jews entered Europe from the .  Both interacted throughout and it will be instructive to compare the resultant genetic legacy of the two peoples.  Both operated strategies that served to preserve their way of life and their success and failure can be compared to some profit.

It is a reminder that peoples do tend to survive even if their name changes to confuse historians.  It has been popular to assume actual extinctions as a common occurrence.  Not so of course.  Even conquered peoples would see their people enslaved but integrated all leading to inter marriage at worse.  Even driven out of a homeland then saw them absorbed next door by a tribe eager to increase their strength to face the conqueror.  There are exceptions but not as common as claimed.

What is true here is that the folk history and other clues all hang together.

Despite their modern-day diversity of language, lifestyle, and religion, 's widespread Romani population shares a common, if complex, past. It all began in northwestern about 1,500 years ago, according to a study reported on December 6th in Current Biology, a Cell Press publication, that offers the first genome-wide perspective on Romani origins and demographic history.

The Romani represent the largest minority group in , consisting of approximately 11 million people. That means the size of the Romani population rivals that of several European countries, including , , and .


"We were interested in exploring the population history of European Romani because they constitute an important fraction of the European population, but their marginalized situation in many countries also seems to have affected their visibility in scientific studies," said David Comas of the Institut de Biologia Evolutiva at Universitat Pompeu Fabra in Spain.


The Romani people lack written historical records on their origins and dispersal. To fill in the gaps in the new study, Comas and Manfred Kayser from in the , together with their international European colleagues, gathered genome-wide data from 13 Romani groups collected across to confirm an Indian origin for European Romani, consistent with earlier linguistic studies.

The genome-wide evidence specified the geographic origin toward the north or northwestern parts of and provided a date of origin of about 1,500 years ago. While the Middle East and regions are known to have had an important influence on Romani language, the researchers saw limited evidence for shared genetic ancestry between the European Romani and those who live in those regions of the world today. Once in Europe, Romani people began settling in various locations, likely spreading across via the Balkan region about 900 years ago.


"From a genome-wide perspective, Romani people share a common and unique history that consists of two elements: the roots in northwestern and the admixture with non-Romani Europeans accumulating with different magnitudes during the out-of-India migration across ," Kayser said. "Our study clearly illustrates that understanding the Romani's genetic legacy is necessary to complete the genetic characterization of Europeans as a whole, with implications for various fields, from human evolution to the health sciences."