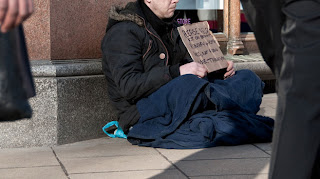 This needs to be monitored as we have seen this problem emerge over the past twenty years with little but lip service applied. It has been dealt with in the past and can be dealt with easily enough. Yet a combination of political correctness and general political timidity has conspired to produce the present morass.

It has to be ended, even if it is merely paying the person's rent for him and sorting him out as a matter of course. Most certainly no one should be left to their own resources in terms of housing and basic food. A sack of potatoes and a cot go a long way in terms of sustaining a person and both can be cheaply available on a guaranteed basis.

Once that is done, it is possible for anyone to begin reorganizing their lives. It was good enough for the Irish navy in the nineteenth century and no one has to do brutal work these days.

They can also be organized into a floating labor pool on that basis to be easily accessed for temporary work. It is never great, but it gives focus and association which is the beginning.


Legislation aiming at effectively ending homelessness across Scotland has come into effect this week.

Any Scot who has become homeless through no fault of their own can receive accommodation, the new law states, according to the Daily Record newspaper. In the past, it was only people with children and other priority groups who had that right.

“This is a landmark day in the fight against homelessness,” Scotland Deputy First Minister Nicola Sturgeon said, according to the paper. “I know the heartache and trauma of homelessness from working closely with households faced with the prospect of losing the roof over their head.”

The change, which was passed in December, will give some 3,000 people each year the means to have a roof over their heads.

“It is absolutely right to offer this guarantee in a time of crisis for people. It sends the signal that we are there to help, there is hope, and that the state will do what it can,” she said.

The measure is part of a plan that was unveiled around a decade ago to quash homelessness in Scotland.

“Now is not the time to pat ourselves on the back. Instead, we need to redouble our efforts and make sure the commitment works in practice across Scotland,” Sturgeon added.

Sturgeon said Scotland has committed around $480,000 over the next two years to provide local authorities with resources to combat homelessness.

“With homelessness figures already heading in the right direction, today we have taken a huge step forward for Scotland,” she said.

The BBC reports that official figures in February show that Scotland’s homelessness rate has fallen to its lowest levels in a decade.

Earlier this year, the Scottish government said it is also attempting to use other measures to prevent people from reaching the point where they need to seek government assistance for housing.

Mary Taylor, the head of the Scottish Federation of Housing Association, said in a statement in November that “challenges remain in trying to ensure that an adequate supply of settled accommodation can be realized,” saying that part of the problem lies in the United Kingdom’s welfare reforms