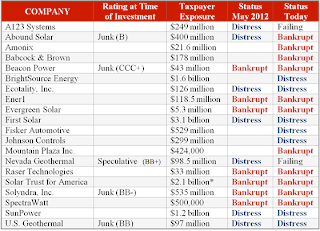 This paints the unpleasant picture made by so called green energy investments shored up by federal financing. The lack of a creditable business model caused me to dismiss them a long time ago long before they even happened. They all needed real subsidies to build out. Once built, it is normally possible to operate on a break even basis but little else. And that is the real problem.
The capital has actually been destroyed.

We have exactly the same proposition haunting the fracking business. The initial flush has to pay off the well or the rapid decline will make it impossible. That this decline rate is still controversial is now disturbing because enough time has elapsed to actually know. We may actually be destroying vasts amount of capital while feeding our market with capital subsidized oil and gas.

All this is a set up for a perfect storm of collapsing energy supplies and related disruption globally. What this means is that the flags are red for green energy and amber for fracked fuel. I am not too concerned yet, but am wary. 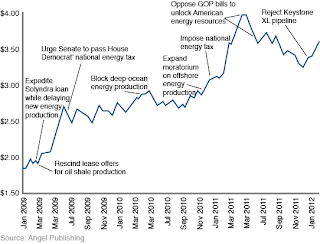 This Energy Sector is Collapsing

We've heard a lot about the promise of so-called "green" energy over the past few years...

And how it will finally lead us all to energy independence.

But let's face it: "Green energy" as we know it is a scandalous rip-off — and a total failure.

After countless big promises (and billions of taxpayer dollars), wind, solar and geothermal provide a mere 9% of America's energy needs.

Just one look at Solyndra, the once-heralded solar company, sums up the whole "green" scam quite nicely...
These guys alone leached $535 million (more than half a billion dollars!) in public funds before going belly-up and undergoing an FBI investigation.\

But they're far from the only culprits in this whole fiasco...

Just a couple of months ago, a company by the name of Himin Solar had their IPO terminated and was suspended from the stock exchange entirely.

Then there's BrightSource Energy, the outfit bailed out by Obama last year despite being $1.8billion in debt.

The scary thing is these are only a few names on a long list of companies just like them...

In just the last year alone, dozens of other solar, wind, and geothermal firms filed for bankruptcy or are on the verge of doing so... after gorging themselves on $90 billion of OUR money.

Take a look at a short list of the biggest "green" scam artists in recent memory:

The entire "green" disaster has spun so far out of control that even Al Gore's company is dumping its holdings in green energy stocks.

According to the Washington Post, Al Gore is "50 times richer than when he left the vice-presidency in 2001," making him "$100 million partly through investing in alternative energy firms subsidized by the Obama administration."

Funny how it works...

I mean, if renewable energy was anywhere close to being a viable power source, it wouldn't need a penny from taxpayers.

But since 80% of all the "green" subsidies and loans went to generous donors of President Obama, it's plain to see that "green energy" firms are little more than fronts for crooks (and former vice-presidents) to pick your pocket.

And get this: In August it was revealed that the Wall Streeter in charge ofindependently reviewing the loans — and who claimed they all carried "minimal risk" — is also a major donor.

Talk about a conflict of interest...

And as outrageous as all of this, it gets worse. Because instead of giving up on the green energy pipe dream, the U.S. government is doubling down on it.

And in March, President Obama enacted a plan in which the U.S. Army partnered with favored firms to develop renewable energy sources.

The cost of this little program? Only $7 billion.

It makes me sick.

But Here's What Really Disgusts Me...

The U.S. government has fought tooth and nail against letting Americans develop the tried and true energy resources that helped make our country an economic powerhouse.

It's clear they are VERY interested in continually doing the wrong thing.