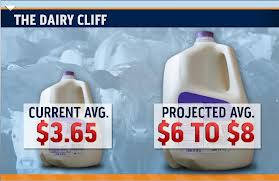 You know that they are going to fix this one, but a little unwanted drama may develop. Otherwise, read this item to just understand what is going on if someone gets excited about it all.

Legislative gamesmanship and its like is becoming decidedly wearing, particularly when problems are hoisted up as an outright cover to churn through a wish list of earmarks.

The US economic system demands serious reform and general overhaul. I continue to see no meaningful progress at all while the general economy remains deflated with little serious recovery even yet four years after the credit collapse. The only positive thing out there is that it has become possible to do business in the credit world that is not burdened by the past.

Get Ready for the Dairy Cliff


Lost in all the anxiety over the Fiscal Cliff, is another little noticed deadline that could force you to pay double the price for a gallon of milk come January 1. The New York Times reminds everyone today that Congress still hasn't renewed the 2008 farming bill, that establishes subsidies and other agriculture programs like crop insurance, nutrition programs, and even food stamps. Without the bill, which must be renewed every five years, our entire food system could get thrown out of whack. The Times wasn't the first to point his out, but others outlets shouting about it hasn't made Congress take notice.

One provision in particular could crush every non-lactose intolerant family in America. The current farm bill supersedes an outdated law from 1949, that requires the government to buy milk at certain prices, in order to prop up the market and support farmers. Without the new farm bill, that old bill—and its poorly devised formulas based on antiquated production methods—would once again be the law of the land, and Washington could be forced to buy milk for as much as $8 a gallon, more than double the current market rate.

That would be (temporarily) great for drought-stricken farmers, who would naturally flood the government with high-priced milk, but would soon create massive shortages that would drive up the price for everyone else. Other companies that rely on milk—cheese, butter and yogurt makers—would go overseas to find new suppliers, upsetting supply chains even more. And taxpayers would get nailed on both ends: Throwing away the government's money on milk it doesn't need, while paying more at the grocery store for the products they do.

The irony is that the "dairy cliff" was intentionally built into the existing farm bill as way to scare lawmakers into making it sure it always gets renewed on time. But with the fiscal cliff trying the same trick on a much larger scale, and every political fight becoming a cutthroat game of chicken, the farm bill has fallen by the wayside. Come January 1, we could all be screaming for outrageously priced ice cream.