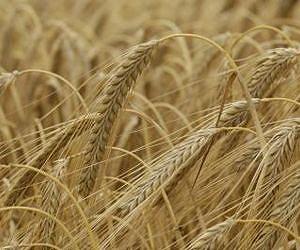 Work like this is always welcome to see. What we need to see is genetic engineering that adapts desert plant strategies into our grassland crops. A thick blade that holds water sounds like a deal maker costing little if any extra plant energy. Such a plant can grab moisture and hold it through a long dry spell. It may even make the blade more palatable and useful to ruminants.

Selection will be helpful, but mostly marginally.

A genetic strategy could be applied across all grains and allow cropping in lands far more arid and make irrigation far more efficient. We know that desert plants can do this quite well.

Now if we could figure out how to produce a plant that happens to absorb moisture out of the atmosphere late at night.


As one of the top 10 barley producers in the world, Canada faces a problem of adapting to the 'new normal' of a warmer, drier climate. The 2012 growing season was considered an average year on the Canadian Prairies, "but we still had a summer water deficit, and it is that type of condition we are trying to work with," said Scott Chang, a professor of soil science in the University of Alberta's Department of Renewable Resources in Edmonton, Canada.

Chang teamed with fellow crop scientist Anthony Anyia of Alberta Innovates - Technology Futures in 2006, following a severe drought in 2002 that dropped average crop yield in Alberta by about half.

They are exploring the genetic makeup of barley and how the grain crop-a Canadian staple used for beer malt and animal feed-can be made more efficient in its water use and more productive.

One of their latest studies, published in the journal Theoretical and Applied Genetics, explores how to increase yield in barley crops while using less water.

By studying the carbon isotope compositions of barley plants and their relationship with water-use efficiency, the researchers developed tools that plant breeders can use to improve selection efficiency for more water-efficient varieties.

The latest findings stem from an ongoing collaboration that is ultimately aimed at bringing farmers a more stable breed of the plant that has less reliance on water and is less vulnerable to climate change.