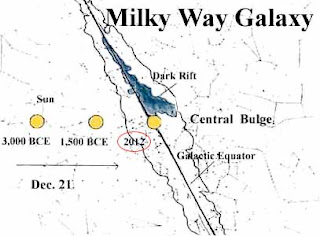 This is a post from the author Graham Hancock on his Face book account. What is useful here is that he lays out the importance of 3114 BC as a calender start point. The Mayans were mathematically driven ans earlier start points may have astronomical significance that locked in other start points, but having a recent start point is natural for a rising civilization. After all we did just that for our start point 2000 years ago.

At the same time one can expect such a start point to be well enough back so as to not foul up the record keeping and normally five hundred years will do it. That is also about as long as most traditions can be sustained against the drift of language.

Thus I would reasonably suspect that the decisions on this calender took place around 2500 BC plus or minus a lot. This of course coincides rather nicely with the dates I have established for the rise of the Atlantean global civilization and the building of the Great Pyramid.

Since we have also discovered that the geological disturbances of 1159 BC were pretty serious in and around the Mayan world, it becomes unsurprising that the bulk of archeological data is all post 1159 BC. I suspect that some coral reefs need to be cored to see if there is foundational stonework to be found.

In the meantime we have zip evidence for an extended Mayan historical period or more properly a Mesoamerican extended historical period although it has been shown that the Mexico city complexes evolved in response to earlier coastal Olmec building and there we have data that takes us to around 1200 BC. Still not as far back as I would like, but certainly close enough to support a thousand year additional prehistory. It is just that I would really like to see a pyramid that is pre 1159 BC. Yet they could well have all been thrown down to be simply torn apart to construct new structures after the Atlantean catastrophe.

It is still remarkably coincidental that we are entering a new calender age just as our own global civilization prepares to reach its apogee which most of my readers will in fact experience even if it is not recognized.

We are about to transition into a new economic order that honors all human life and optimizes the terraforming of this planet. This blog has largely shown the way with minor details to be policed up. Our ultimate active surface population is around 100 billion souls and likely ten times that in terms of sub surface populations. I put these numbers out to remind us just how much real work remains to be done. Yet it all starts now at the beginning of this new age of over 5,000 years.

The actual build out will take around five centuries though. This is more than enough to complete our surface work and expand the population. For those who do not understand this blog's core concept, it is that terraforming is done through application of the model farm that is operationally self sufficient and ecologically balanced and neutral in terms of inputs and outputs.

Tomorrow is the first day of the new year, a time for resolutions, a time for hope, a time to turn over a fresh page. Since the Mayan calendar is cyclical, it's appropriate to remember that 21 December 2012 marked the end of a great cycle of the human story -- in the Mayan view of things -- and that we are now embarked upon a new cycle or epoch. The last 13 Baktuns of the Long Count began in 3114 BC, which is 5126 years ago. It is interesting that these five millennia have seen the rise of the big centralised hierarchical state, big, centralised, hierarchical religions and gigantic global corporations. I think everyone is aware that the system based on those institutions is broken and that these vast, impersonal bureaucracies have had their day -- so in a way the Mayan calendar is right. Something new will have to emerge, something more human, something with more respect for individual sovereignty, something -- hopefully -- that will be built on love rather than on hatred, fear and suspicion. With individual sovereignty comes individual responsibility so I guess what we make of our world in the next 5126 years is very much up to us. Happy New Year!