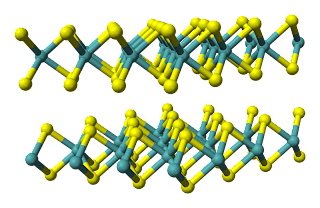 There is a lot to do yet, but it appears that graphene was just the beginning with 2D molecular sheets.  Here we find out that MoS2 is far easier to use and likely a far better choice for electronics simply because it has a natural bandwidth.  For starters it means flat screen TV without the weight of silica.  It is a huge technological advance and continues the electronics revolution.

I am looking forweard to complex laminated devices having many layers of active electronic mendia that can be used to fabricate the key external shell of a Magnetic Field Exclusion Vessel(MFEV).

This whole technology has exploded over the past several years with more participation every year.  We will have the Holodeck and the UFO or MFEV inside thirty years.

MIT researchers produce complex electronic circuits from molybdenum disulfide, a material that could have many more applications than graphene. The discovery of graphene, a material just one atom thick and possessing exceptional strength and other novel properties, started an avalanche of research around its use for everything from electronics to optics to structural materials. But new research suggests that was just the beginning: A whole family of two-dimensional materials may open up even broader possibilities for applications that could change many aspects of modern life.

The latest “new” material, molybdenum disulfide (MoS2) — which has actually been used for decades, but not in its 2-D form — was first described just a year ago by researchers in . But in that year, researchers at MIT — who struggled for several years to build electronic circuits out of graphene with very limited results (except for radio-frequency applications) — have already succeeded in making a variety of electronic components from MoS2. They say the material could help usher in radically new products, from whole walls that glow to clothing with embedded electronics to glasses with built-in display screens.

Palacios says he thinks graphene and MoS2 are just the beginning of a new realm of research on two-dimensional materials. “It’s the most exciting time for electronics in the last 20 or 30 years,” he says. “It’s opening up the door to a completely new domain of electronic materials and devices.”


Like graphene, itself a 2-D form of graphite, molybdenum disulfide has been used for many years as an industrial lubricant. But it had never been seen as a 2-D platform for electronic devices until last year, when scientists at the Swiss university EPFL produced a transistor on the material.


MIT researchers quickly swung into action: Yi-Hsien Lee, a postdoc in associate professor Jing Kong’s group in EECS, found a good way to make large sheets of the material using a chemical vapor deposition process. Lee came up with this method while working with Lain-Jong Li at Academia Sinica in and improved it after coming to MIT. Palacios, Wang and Yu then set to producing building blocks of electronic circuits on the sheets made by Lee, as well as on MoS2 flakes produced by a mechanical method, which were used for the work described in the new paper.


Wang had been struggling to build circuits on graphene for his doctoral thesis research, but found it much easier to do with the new material. There was a “hefty bottleneck” to making progress with graphene, he explains, because that material lacks a bandgap — the key property that makes it possible to create transistors, the basic component of logic and memory circuits. While graphene needs to be modified in exacting ways in order to create a bandgap, MoS2 just naturally comes with one.


The lack of a bandgap, Wang explains, means that with a switch made of graphene, “you can turn it on, but you can’t turn it off. That means you can’t do digital logic.” So people have for years been searching for a material that shares some of graphene’s extraordinary properties, but also has this missing quality — as molybdenum disulfide does.


Because it already is widely produced as a lubricant, and thanks to ongoing work at MIT and other labs on making it into large sheets, scaling up production of the material for practical uses should be much easier than with other new materials, Wang and Palacios say.


Wang and Palacios were able to fabricate a variety of basic electronic devices on the material: an inverter, which switches an input voltage to its opposite; a NAND gate, a basic logic element that can be combined to carry out almost any kind of logic operation; a memory device, one of the key components of all computational devices; and a more complex circuit called a ring oscillator, made up of 12 interconnected transistors, which can produce a precisely tuned wave output.


Palacios says one potential application of the new material is large-screen displays such as television sets and computer monitors, where a separate transistor controls each pixel of the display. Because the material is just one molecule thick — unlike the highly purified silicon that is used for conventional transistors and must be millions of atoms thick — even a very large display would use only an infinitesimal quantity of the raw materials. This could potentially reduce cost and weight and improve energy efficiency.


In the future, it could also enable entirely new kinds of devices. The material could be used, in combination with other 2-D materials, to make light-emitting devices. Instead of producing a point source of light from one bulb, an entire wall could be made to glow, producing softer, less glaring light. Similarly, the antenna and other circuitry of a cellphone might be woven into fabric, providing a much more sensitive antenna that needs less power and could be incorporated into clothing, Palacios says.


The material is so thin that it’s completely transparent, and it can be deposited on virtually any other material. For example, MoS2 could be applied to glass, producing displays built into a pair of eyeglasses or the window of a house or office.


Ali Javey, an associate professor of electrical engineering and computer science at the University of California at Berkeley, who was not involved in this research, says layered materials such as MoS2 are “a promising class of materials for future electronics,” but cautions that “the future looks bright for layered semiconductors, but still work needs to be done to better understand their performance limits and large-scale manufacturing.”


Overall, Javey says, the MIT team’s research is “elegant” work that “takes an important step forward in advancing the field of layered semiconductors.”

ABSTRACT - Two-dimensional (2D) materials, such as molybdenum disulfide (MoS2), have been shown to exhibit excellent electrical and optical properties. The semiconducting nature of MoS2 allows it to overcome the shortcomings of zero-bandgap graphene, while still sharing many of graphene’s advantages for electronic and optoelectronic applications. Discrete electronic and optoelectronic components, such as field-effect transistors, sensors, and photodetectors made from few-layer MoS2 show promising performance as potential substitute of Si in conventional electronics and of organic and amorphous Si semiconductors in ubiquitous systems and display applications. An important next step is the fabrication of fully integrated multistage circuits and logic building blocks on MoS2 to demonstrate its capability for complex digital logic and high-frequency ac applications. This paper demonstrates an inverter, a NAND gate, a static random access memory, and a five-stage ring oscillator based on a direct-coupled transistor logic technology. The circuits comprise between 2 to 12 transistors seamlessly integrated side-by-side on a single sheet of bilayer MoS2. Both enhancement-mode and depletion-mode transistors were fabricated thanks to the use of gate metals with different work functions.


Diagram shows the flat-sheet structure of the material used by the MIT team, molybdenum disulfide. Molybdenum atoms are shown in teal, and sulfur atoms in yellow.