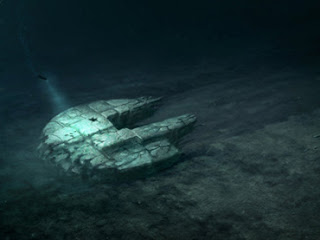 Why in hell would one build a sixty meter anchor out of concrete. Even hollow and this was long before engineering was up to the trick, it is a pretty odd undertaking. On top of that dumping a stainless steel construction onto the sea floor never needed an anchor. And when an anchor was needed, large stones nicely suffice. In short, nice try but seriously unconvincing. We need a real manufactured structure for this one.

Two things have not been commented on. The structure is a perfect circle until proven otherwise and simply does not occur in nature. It is manufactured. It may or may not be of concrete or stone.

Secondly on moving down ramp,it appears to have left material behind and could be the 'bow' or stern of a larger structure. In that case we do not want to leave the prospect of been photo shopped into outright fraud of the table just yet.

Real samples of the material observed and cleaning off a surface will help us. This should already exist I would think. In the meantime give us the rest of the imaging material rather than this way too selective piece.

http://www.rt.com/news/baltic-ufo-war-nazi-128/
The mysterious disc-shaped object at the bottom of the Baltic Sea could be a relic from a giant World War II device placed there by the Nazis to disrupt Soviet submarine navigation.

The object may be the concrete anchor of the device, which also had to be fitted with stainless steel mesh, Swedish naval officer and warfare history expert Anders Autellus told Swedish newspaper Expressen. It would interfere with submarine radar signals and make them crash.

The mesh itself may well have eroded away over the decades, but the images of the object made by the Ocean X team exploring it show what appear to be holes, where it was attached to the foundation, he added.
Stefan Hogeborn, a member of the team, concurs, saying their find is located just under an important shipping route. German vessels carried many goods important for the war effort during the war, and Soviet submarines sneaking from the Gulf of Finland into the Baltic Sea targeted them.

If the theory is true, the trap may be an important historical find, but there is evidence against it too. The 60-meter object studied by Ocean X is way larger than what Germans and some other warring nations deployed during the World War II. Peter Lindberg, another member of the team, says he still believes the object is a natural formation.

The “Baltic UFO” was discovered in May last year through sonar imaging technology. Its unusual shape provoked a good deal of speculation, with some people comparing it to the Millennium Falcon ship from the movie Star Wars. Skeptics say the peculiar images may have resulted from improper adjustment of the sonar and the limitations of the technology.

Ocean X, professional wreck-hunters, have returned to the site with better and more sophisticated equipment after receiving funding from an undisclosed sponsor. They hope the object may become a popular tourist attraction once unearthed.