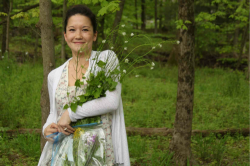 There is a huge undeveloped market in growing any number of wild plants on prepared beds. This allows for consistent quality. Lamb's quarter of which I am most familiar with is picked on the emergence of the forth leaf for best flavor and this or similar rules need to apply to a number of plants. Getting productivity means prepared seed beds.

The same applies for wild mushrooms if one can actually manage a working bed.

My point is that taking the first step toward domestication changes little except to reduce harvesting difficulty and expense. Of course, lambs-quarters is the most common garden weed and if one grooms each bed daily one can collect plenty of product. A bed is still better.

A commercial market in lambs-quarters is long overdue anyway as steamed or boiled it is superior to spinach or even chard in flavor.

I suspect the same is true for a number of plants and what is needed is restaurants to pay attention. A dish with a side of steamed wild plants has to be a draw simply for novelty and that justifies a grower collecting seeds and putting in beds.

Wild plants: The best ingredients you didn’t know you had

Plucking seemingly random weeds out of the dirt and sticking them in your mouth may be disconcerting to most city dwellers, but that’s exactly what a group of New Yorkers traveled to New Jersey to do recently.

Squinting in the sun on a patch of meadow, we watched as our fearless guide, Tama Matsuoka Wong, author of the new cookbook and guide Foraged Flavor, expertly scavenged delectable weed after delectable weed. From dainty yellow wood sorrel to aromatic garlic mustard, we smelled the newly picked shoots, and then gingerly took a nibble. Our taste buds were rewarded by flavors that were bright, fresh, and alive. And by the time we’d made our way past the meadow and into the forest, we were like a pack of hungry rabbits, chewing away at whatever tasty morsel Wong handed us.

A professional forager, Wong co-authored Foraged Flavor with Eddy Leroux, chef at the New York restaurant Daniel. The book offers up detailed instructions on the when, where, and how of foraging and presents dishes centered around 72 of Wong and Leroux’s favorite wild plants. Their resulting recipes are easy yet unique, and include dishes like dandelion flower tempura and grilled day lily shoots.

Of the approximately 300,000 wild plants in the world, experts say that between 4,000 and 7,000 are known to be edible. Compare that with the measly produce selection in your local grocery store (where it’s rare to see more than 60 types of fruits and veggies) and it’s clear your taste buds are missing many an opportunity.

“The way we farm has become so industrial and seems to focus less on the flavor and variety of food,” Wong says. It’s only in the last century that small, local subsistence agriculture has given way to large-scale commercial food production. Along with this shift, most traditional foraging knowledge has disappeared. The result is a loss of variety, but also of biodiversity — a crucial element of food security.

While Wong’s not suggesting we raze the big farms and return to the caves, she does encourage readers to open their eyes to the medley of dinnertime opportunities that may be growing smack in their own backyards. (As many as 20 different plant species can be found in one nine-inch square patch of meadow, she says.)

Wong wants to introduce the crazy and unique to the dinner table, but she also points out that many wild plants are highly nutritious. For example, purslane, a Persian herb that appears in the book’s eggplant caponata recipe, is a little known source of omega-3, while sumac, a bright red berry that makes for a mean jelly or tart, comes locked and loaded with vitamin C.

In addition to all of these priceless benefits, foraged foods are, well, priceless. Nutritious, yummy, and free — what more could an adventurous diner want? Spring and early summer are some of the best times to hunt for your favorite wild foods (it’s pineapple weed, lamb’s quarters, and wild garlic season in New York), so get ye to a meadow or vacant lot for some quality foraging.