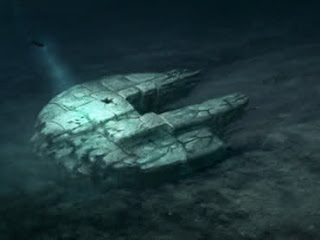 Everyone is trying hard to drum up a story out of this but I am more inclined to think I an looking at a concrete structure fabricated during WWII and then lost overboard during attempts to put it into position.  Sixty meters is human scale and the apparent block like fault lines somewhat conforms to concrete pour practice.  It appears to be three meters thick on the rim but may well be a lot thinner in the lid portion.  Regardless it fell to the bottom and then over time it slid downhill a full 300 meters.

It is still way too big for anything I understand.  Thus the important question now is to determine if it is concrete, and if not, then what is the material?

It may be an ancient structure but that must be considered unlikely simply because the path still exists with limited mud on it.  It does not suggest thousands of years.  Yet it appears to be a structure and a carefully shaped structure at that if the rim wall is concave.  This all suggests that the structure is also hollow and could be entered.

The soot report is merely clay fines I am sure as carbon would merely float away.

We are not really any clearer on what we have except it is not a space craft and appears to be shaped stone.  It may even turn out to be a stone platform with an entrance ramp and the holy of holies accessed through the entry hole.  If it is fabricated with fitted stone blocks circa five thousand years ago, then we can blame the Minoan influence.  They at least are already known to have traded here. Curiously the ragged edge suggests that idea has a chance.

We must now wait for further data.

A “UFO-shaped” object, found at the bottom of the last year, has puzzled many. And a Swedish expedition that plunged into the deep eventually surfaced with more questions than answers.

Covered in soot, with little “fireplace”-like structures and lying at the end of a 300-meter “runway” – this is not something you would expect to find sitting on the sea floor. And whatever you think about extraterrestrial life, “the thing” is still there and there has to be an explanation. So what could it be?

On June 19, 2011, a team of Swedish treasure hunters was exploring the bottom of the Baltic Sea with their sonars when they noticed a bizarre, disc-like structure at a depth of 90 meters. Back then, international experts failed to explain the sonar images. In 2012, after months of preparation, the Ocean X Team, as they call themselves, went back in order to unveil the mystery.

“We've heard lots of different kinds of explanations, from George Lucas's spaceship – the Millennium Falcon – to ‘It's some kind of plug to the inner world,’ like it should be hell down there or something,” The Daily Mail quoted one of the founders of the Ocean X Team, Peter Lindberg, as saying.


The massive object rises three to four meters above the seabed and is about 60 meters in diameter. Members of the expedition describe it as something round, with rugged edges and concave sides – resembling a “huge mushroom” or, if you will, the Millennium Falcon spaceship from Star Wars.


The central part of the object has an “egg-shaped hole” leading inside. Surrounding the hole, they found odd-looking circular rock formations which looked almost “like small fireplaces” with stones covered in “something resembling soot.”


“Since no volcanic activity has ever been reported in the , the find becomes even stranger,” said Lindberg in a press release at OceanExplorer.se. “As laymen, we can only speculate how this [could be] made by nature, but this is the strangest thing I have ever experienced as a professional diver.”

Another observation that the crew made in person was the 300-meter-long “trail” that they described as a “runway or a downhill path that is flattened at the seabed with the object at the end of it.”


The diving team noted a 300-meter “runway” leading up to the object, implying that it skidded along the path before stopping

The group says that they passed samples from the object to scientists for further examination. Other experts are studying the sonar images and processing the rest of the data from the ship. It is worth mentioning though, that sonar-based imagery has been known to become a source of confusion, when natural rock formations have been taken for foreign objects.


Being the scene of numerous battles in the past and remaining a busy maritime route, the is a renowned treasure trove for shipwreck hunters. An estimated 100,000 objects are thought to rest on its floor.


"Landing spot". The exact coordinates of the object have not been released, but it is confirmed to be at the bottom of the in the Baltic Sea, between and
Posted by arclein at 12:00 AM